We would all like to think that our governing bodies (local and national) don't make stupid blunders, but they do.

What's worse, is when these mistakes are pointed out to them they take no action to correct the mistakes. That's what happened in this next article From Atlas Obscura.

The two-cell building in Nebraska was briefly owned by a teenage boy and then a Hollywood dummy. 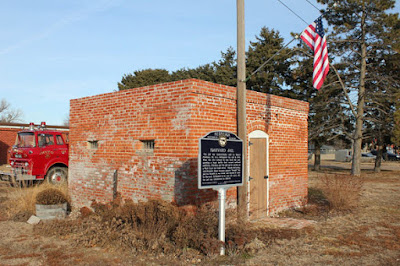 That story is hilarious. Just goes to show you the depths of some people's stupidity. The "dummy" ends up owing the building is just too funny.

Our local government is just as stupid when it comes to property. Story is too long to tell but it has lost money.

I hope that kid ran for election in that town he was far smarter than what they had and look at the money he made for his $1.50 investment.

Cold here but the rain has moved out. I finally had my furnace fixed by a friend of my daughters, just in time to as we are going to get hit with a freeze Thur. night.

But your cozy kitchen is still the place to be

Hey Bigfoot...
Glad you liked it, my friend.
Thanks for stopping by today!


Hey Linda...
They only made things look worse when they tried to cover it all up.
Thanks for coming over today!


Hey Momlady...
I wonder how so many governing bodies can be so dumb when it comes to property. Scary!
Thanks for the visit today!


Hey Jo...
Certainly couldn't do any worse, could he. More power to the young folks like him.
Thanks, sweetie, for dropping by this morning!

Love it! The best part is that the kid pointed out the mistake before taking advantage of it.

Bubba, sounds like the "dummies" were the original owners.

Big hugs - get ready for a cold Christmas!

Hey Sixbears...
He pointed it out, they laughed at him, so he bought it! That will teach them!
Thanks for stopping by today!


Hey Sis...
That's what I was thinking!
Thanks for the visit this morning!

Charlie McCarthy had a decade-long "feud" with W.C. Fields. The cuttings remarks and insults entertained radio audiences for years. Would have been really funny if Charlie had locked up Fields for drunk in public or vagrancy in his jail. You would swear that Bergen and McCarthy were two different people, BTW.

Hey Oldnorthstate...
I didn't know about their feud. Thanks for the info.
Thanks also for coming by today!

Hey Dizzy...
looks that way, doesn't it? Except for the kid.
Thanks for the visit today!