Sometimes strange things are found in the most unlikely places. Like these mummies found in a salt mine. That qualifies as strange in my book. 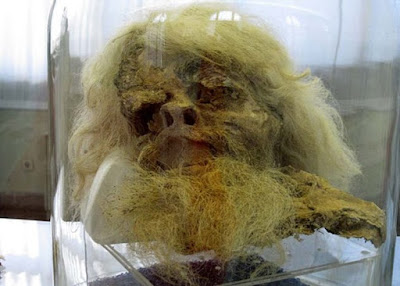 A functioning salt mine in Northwestern Iran has produced six naturally preserved mummies. Chehrabad Salt Mine’s “salt men” range in date from 539 BC to AD 640. Their beards, hair, and even clothing are often nearly perfectly preserved. In some cases, stomachs, colons, and last meals are intact.

The most recent discovery was made in 2007. Experts have identified this mummy as a Roman-era miner killed by falling rocks or an earthquake. The first five salt men discovered were given to scientists for research. However, the newly discovered mummy will remain underground. There is concern about the Iranian government’s lack of equipment and facilities to help preserve the salt man.

A Stanford folklorist believes the salt men might be connected with satyr legends. Their protruding jaws, snub noses, and hair bear uncanny resemblance to depictions of satyrs in ancient accounts, including St. Jerome’s tale of a satyr head on display in Antioch.

While I am all for the quest for knowledge in most cases, I can't help but wonder just what we can really hope to learn from these individual mummies. Why not let them rest in peace?

Coffee in the kitchen this morning. Raining outside.
Posted by HermitJim at 12:00 AM

I agree. Let them rest in peace. We don't have to know everything.

I never did understand this obsession with digging up graves and removing the mummies/corpses for scientific study. How would you like it if in the future someone dug up your grave to study your remains? Let them rest in peace.

Hey Momlady...
I think that is a great idea. It can't help us any, right?
Thanks for stopping by this morning!


Hey Linda...
I can't see that it matters in the long run. I feel that letting them rest is best.
Thanks fort coming over today!

I feel the same let them be. A few years ago they dug up some one who died about 100 yrs ago to prove they were murdered OK so what is the killer still alive to be sent to prison.

It looks like the consensus is to let them be. I agree. You know what will be learned from studying the body? The guy's dead. That's about all that will be discovered............

Human curiosity sometimes reaches far beyond the boundaries of respect and decency, all in the name of Science. Otzi the Iceman currently lies within a man-made deep freeze... many ancient bog mummies are on permanent display in various museums. Personally, I plan to be cremated.

Sort of looks like me when I get up in the morning. . .