Sometimes the things that we enjoy the most can cause a big problem for us.

This article from Listverse shows exactly what I mean. I can't imagine this ever happening to me, at least...I hope not! 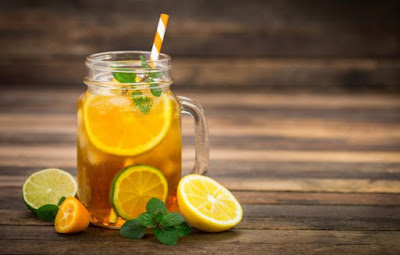 An Arkansas man suffered kidney failure as a result of drinking too much iced tea.

The 56-year-old man drank about 16 240-milliliter (8 oz) cups of iced tea every day. In May 2014, the man was admitted to the hospital after complaining of nausea, weakness, and body aches. Doctors discovered that his kidneys were extremely clogged and irritated. They started him on dialysis, which he will probably be on for the rest of his life.

The damage to the man’s kidneys was caused by a chemical called oxalate. This chemical occurs naturally in black tea as well as other foods such as rhubarb and spinach. Too much oxalate can lead to kidney damage.[2] The man from Arkansas was consuming 3–10 times more oxalate than the average American.

According to the Harvard School of Public Health, consuming up to four cups of tea per day is a safe amount. Sixteen cups per day is too many.

Seems like everything I like is turning out to be bad for me. Coffee and eggs seem to be on again and off again, so maybe tea will follow that same line. Who knows?

Coffee in the kitchen again this morning. Made some chocolate fudge if you want some.
Posted by HermitJim at 12:00 AM

Labels: an OD on tea

"Sixteen cups is too many", I like that line!

And don't forget to add bacon to the off-again-on-again list. Seems like it changes every few months.

If I O.D. it will be on chocolate. Merry Christmas

Too much of anything can be dangerous, it seems. Fudge? Mmmmmmm. My mother made fudge. Hard to find the good stuff.

Hey Rob...
Could be a warning for many things.
Thanks for stopping by today!


Hey Sis...
I agree about the bacon being on the list.
Thanks for coming by this morning!


Hey Linda...
Now that I can understand.
Thanks for the visit this morning!


Hey Momlady...
Some is better than others, that's for sure!
Thanks for stopping by today!

Well now that is a lot of tea but who knew it would cause that much damage.

I was up earlier and let Fred out but I was still exhausted from 2 days of mass cooking so I went back to bed. Didn't fall back to sleep but it just felt so good not to be on my feet. Now I hope there is a piece of fudge left

Hey Jo...
Don't worry, sweetie. I'll save ya some.
Thanks for dropping by today!

I will pass on the fudge but will have a big cup of coffee. In fact, you just made me want a cup right now. . .

Hey Dizzy...
Extra strong coffee, coming up!
Thanks for coming over today, Dizzy!