The Legend Of Shiprock...!

The very name of this natural wonder conjures up all sorts of images in the mind, doesn't it?

As bold as the images are, the legend is even more striking. Here is a brief story of the legendary Shiprock. 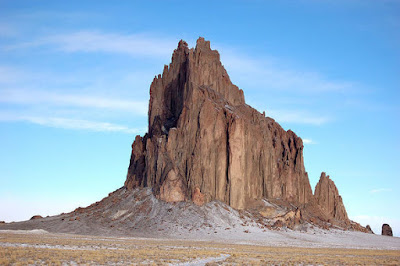 Rising high above the surrounding desert, the rock formation known as Shiprock has long been a point of fascination.

This striking volcanic plume was formed around 30 million years ago, developing as a plug within the vent of an active volcano. Over time, the rest of the volcano eroded away, leaving the jagged outcrop all alone in a vast expanse of plain. At over 1500 feet, it’s the tallest structure for miles and miles.

The structure is an epicenter of legend within the Navajo culture. Called Tsé Bitʼaʼí or “the rock with wings,” myth says that the Shiprock was a piece of land that became a bird, carrying the ancestral people of the Navajo on its back. At sundown, the enormous creature settled in its current desert location and promptly turned back to stone. The newly-arrived people settled on the rock’s peak, leaving only to collect food and water. However, one day the outcrop was unexpectedly struck by lightning, stranding members of the tribe among its shards. Since then, the rock has been forbidden to people, who may disturb the ghostly spirits of those left behind.

Although the steep, perilous sides of the Shiprock were once considered a great prize among rockclimbers, human ascents have been expressly off-limits since 1970, in accordance with Navajo custom.

Once again Nature furnishes a beautiful scenic wonder. How can we ever get tired of all the beautiful surroundings we have here on our little planet?

Coffee inside again this morning. Chocolate chip cookies are fresh.
Posted by HermitJim at 12:00 AM

What a majestic site that is. Mother Nature never disappoints me. I never knew the legend of the rock, so thanks for sharing it history with us. Very cold here today - only 12 degrees when I woke up. Thanks for the cookie.

Hey Linda...
12 degrees? That's too cold! I couldn't handle that.
Thanks for stopping by today!

While I knew of Ship Rock I had never new the story behind it. Great post and I love Indian beliefs.


I'm sitting here freezing and then I look at Linda's temps and suddenly I think I should put on shorts. 44 here this morning. So nice hot coffee and fresh cookies yep that's the ticket

I looked at that picture & tried to imagine that as being part of a whole mountain, then take the rest of the mountain away. Amazing!

This country has so many beautiful, awesome, and spectacular things to see, you wouldn't have enough time in one lifetime to see it all. I have seen a lot of it, all but two states and the southern part of Canada.

Hey Jo...
The old legends are pretty cool, for sure.
Thanks for dropping by today!


Hey Rob...
Sure makes for an interesting picture, doesn't it?
Pretty good weather there, I'd say.
Thanks for stopping by today!


Hey Dizzy...
That's way more than I've seen. Lotta miles on those trips.
Thanks for the visit today!

Been quite a few years since we went to New Mexico. There are some stunning natural features out there.

Hey Sixbears...
That's what I hear. I've never been there myself.
Thanks for coming over today!