Something I haven't had in a while is a 7-Up! I used to drink it a lot when I was younger, but lately...not so much. Wonder if this is the reason why.


Feel Good With 7-Up 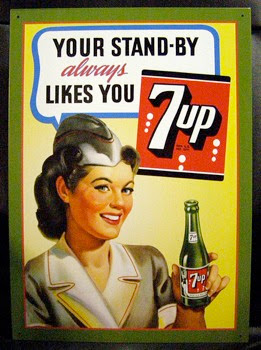 The drink was originally marketed as a hangover cure – due to the inclusion of lithium citrate. It was released just a few years before the Wall Street crash of the 1920s and it was marketed under the name “Bib-Label Lithiated Lemon-Lime Soda” – quite a mouthful! The name was changed to 7-Up shortly after its release but lithium remained one of the ingredients until 1950. Some popular myths surround the name of the drink – but the name is most likely due to the original recipe containing 7 ingredients (with the “up” portion relating to the lithium) or the fact that lithium has an atomic mass of 7.

Seems to me that a very large number of our popular soft drinks today started out with a lot of ingredients that were not exactly good for us, if you know what I mean.

Soft drinks today are pretty unhealthy too. And not only for the sugars.
When I was 16, I worked summers full time in a 7-Up bottling plant in Fort Worth. Hard work, but I was happy to get my $1.60 per hour pay. It was a big increase from the $1.30 I was getting at my prior job at a gas station. We bottled different drinks there, all came down the conveyor cold, fresh from the bottling room.
End of summer I had 12 tooth cavities to get filled.

No wonder they say soft drinks aren't good for our health. i had no idea about the Lithium. Good thing I really don't drink a lot of soda these days. Have a great weekend.

Hey Mamahen...
I reckon most of us didn't know.
Thanks for stopping by today!

Hey Bigfoot...
It's a wonder that many of us survived. The after effects were not pleasant, that's for sure.
Thanks for coming over today!

Hey Linda...
I still drink more than I should. Guess I'm addicted.
Thanks for the visit this morning!

As kids my dad was very strict about no soda in the house. So we only had it on special occasions. As an adult I did drink more but I rarely drink it now. Didn't know the ingrient that came in 7 up Yikes.

56 degrees this morning I'm loving it. See you on the patio

Hey Jo...
I think it was about the same around my house.
Thanks dear, for dropping by today!

Hey Dizzy...
Dr. Pepper was another one that used some narcotics in the original, I believe. Like I said, it's a wonder we managed to survive this long considering.
Thanks for coming over today!