We all know that nature can send some bad things our way every now and then. Those are the times that a little luck sure comes in handy. From Listverse, here is what I mean.


Struck By A Lava Bomb 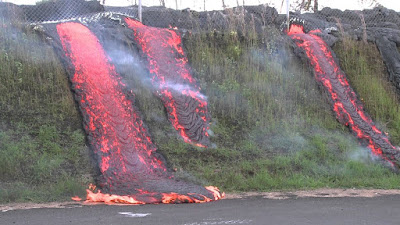 May 2018 saw the Puna district of Hawaii’s Big Island inundated with lava flows from the opening of numerous fissures. Many people evacuated, but some remained in a bid to protect their homes and those of their neighbors. One such resident was Darryl Clinton, who lived to the east of the Leilani Estates neighborhood, which was hit by quite a bit of volcanism.

Darryl knew the dangers. While lava flows are generally slow and easily avoided, “lava bombs,” ejected gobs of molten rock, are of greater concern. For five days, he and others would hose houses down when they were struck by flying molten rock from Fissure 17, and they were proficient in watching for the lava bombs, gauging where they’d land, and making sure they weren’t standing in the bombs’ paths. Darryl’s luck ran out on May 19.

That day, Darryl was standing on the third-floor lanai of his neighbor’s house and talking on his phone. A lava bomb which Darryl would later describe as moving less in an arc and more like a rifle shot hit him in the ankle, flipping him off his feet and sending him into a couch, which promptly lit on fire. A friend rushed to his aid. Darryl looked at his ankle and saw bone protruding from his flesh. His foot was hanging off the rest of his leg “like a hinge,” and he was bleeding profusely. At this point, all Darryl knew was excruciating pain and the fear that he’d bleed to death.

Darryl’s friend got a tourniquet on him and dragged him downstairs and into her truck. She called 911 and sped off to meet up with first responders. Darryl was taken to the Hilo Medical Center, fully expecting to lose his leg. Amazingly, doctors managed to save it. Darryl said of the lava bomb that hit him, “It was a mean one. And I mean, it could have hit anywhere else and it would have been all over.” Despite his brush with death, Darryl has no plans for leaving the area and described seeing the lava flows up close as “the event of a lifetime."

Either this guy was very lucky on that particular day, or he had an Angel on his shoulder! Could be a combination of both, I reckon...

Coffee out on the patio, where the temps are much cooler today.
Posted by HermitJim at 12:00 AM

Hey Kathy...
It sorta seems as though you are right!
Thanks for stopping by this morning!

I am placing all my money on the "Ange". However, a little bit of Good Luck can be grown into the mix. I'll bring a Racine Kringle to share with everyone this morning.

Hey Linda...
I like the way you think, my friend.
Thanks for coming over this morning!

I think his Angel was the woman who saved his life and a lot of luck.

Aren't the mornings beautiful. See you on the porch and thank you Linda for the Racine Kringle

Hey Jo...
She certainly was lucky for him! Probably saved his life as well.
Thanks for dropping by today, sweetie!

Hey Mamahen...
Seems to be the majority feels the same way.
Thanks for the visit this morning!

What goes around comes around - he was saving a neighbor's house, and someone was there to save him. Do unto others …

Hey Sis...
Always good to have a little good karma on your side, I reckon. I agree that yesterday turned out good!
Thanks for being here yesterday and for coming over today!