One thing you have to give to some of the gunfighters of the Old West, is that they had some great nicknames! 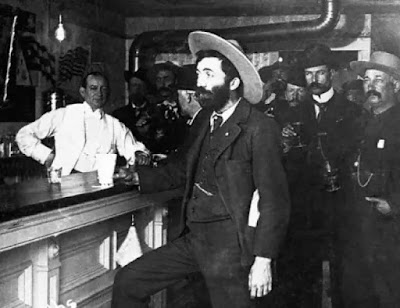 John “Texas Jack” Vermillion was a Confederate soldier in the Civil War, then a lawman, and then an outlaw. The origin of his nickname, “Texas Jack,” is unknown, but when asked why that was his nickname, he famously replied, “Because I’m from Virginia.” He took part in the 'Earp Vendetta Ride' that was glorified in the movie Tombstone, and afterwards joined the Soapy Smith Gang in Denver, Colorado.

Jefferson “Soapy” Smith was a famous con artist and crime boss, who gained his sobriquet “Soapy” after his most famous scam - a prize-package soap-selling racket. He was known for his swindles all across the US, including rigging city and state elections and cheating clientele in gambling halls he ran.

Texas Jack was with Soapy in 1889 at an Idaho train depot when a rival gang tried to assassinate Soapy. In 1898, Soapy tried to rob a man of $2,700 worth of gold (around $80,000 today) in a game of three-card monte, and the next day he was fatally wounded in a gunfight known as the Shootout on Juneau Wharf. Texas Jack either drowned in 1900, or died peacefully in 1911.

No matter how they died or what name they went by, these gentlemen were certainly colorful...to say the least!

They give true meaning to the name "colorful characters". More clouds, wind and rain again today. What happened to the sun?

I had never heard of either of them. "Born in Virginia"? As good a reason as any I suppose. As usual informative and entertaining. Love you,Bubba.Late posting this morning. Later than usual.

Hey Linda...
Sure would be nice if the sun made an appearance, wouldn't it?
Thanks for stopping by today!

Hey Sis...
Guess that was his attempt at humor. Who knows?
Thanks for coming over today!

Great names and being born in Virginia, is to funny

Camping trip was a fail so see you on the patio.

Lol...Love the names, and the line because I'm from Virginia! Sunny but cool here this a.m. Stil, it could be worse. I'm on my way to the patio:))

Hey Jo...
Sorry the camping trip was a no-go, but always glad for your company.
Thanks for dropping by today, dear!

Hey Mamahen...
Sun shine does make a big difference, that's for sure.
Many thanks for the visit today!

There seems to be less room for colorful characters in our modern world. . . except for you and I, of course!

Hey Sixbears...
I'm afraid you are right about that, my friend. I wonder why?
Thanks for coming over this morning!

That started me back to watching my favorite old western movies again. lol