This next story is so strange that I felt it certainly qualified for Freaky Friday. I found it on Listverse. 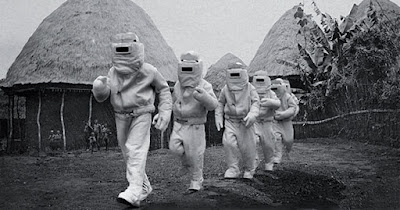 Zambia is one country you do not hear about often. It is a landlocked country tucked somewhere in south-central Africa. In 1964, it joined the space race and planned to land a man on the moon before the US or the Soviet Union ever did. This was five years before Neil Armstrong stepped foot on the moon.

The Zambian space program was the private project of Edward Mukuka Nkoloso, a schoolteacher and founder of Zambia’s National Academy of Science, Space Research and Philosophy. Mukaka recruited twelve prospective astronauts including a 16-year-old girl called Matha Mwamba for the planned moon landing.

Mukuka lacked funding for his space project. The Zambian government was not interested in a partnership and the United Nations, United States, Soviet Union and Israel had ignored his funding requests. Nevertheless, he continued to train his astronauts using an old drum he had found.

The trainee astronauts entered the drum, which was then rolled round a tree or down a hill to imitate flight conditions. The astronauts also learned how to walk on their hands, which Mukaka claimed was the only way a human could ever walk on the moon.

The whole thing was so hilarious that international reporters started to consider it a joke. Mukaka never clarified his intention even though he seemed to be serious about it. He once told an interviewer “I’ll be laughing the day I plant Zambia’s flag on the moon.”

If nothing else, you have to give the man credit for chasing his dream, right? Something I believe more of us should do.

I will give him credit for pursuing his dream. That is how so many modern inventions have been discovered. Have a great weekend.

Hey Linda...
He must have known it was doomed from the start, but at least he tried.
Thanks for coming by today!

Good thing it didn't get off the ground. If it did, what if he missed the moon, or crashed on it. Did he even have plans to bring them home or was it a one way trip?

Hey Dizzy...
All good questions. I'd like to know the answers as well.
Thanks for the visit today!

Back when I was a kid in the late 60s there were space clubs and even boy scout troops doing simulated space missions. One of the things they'd do is see how long they could get along in the cramped conditions of a mocked up space capsule.

27 degrees here this morning. Not as cold as space, but cold enough for me on this planet. Need more coffee.