Not long ago we did a post about "Old Mike" from Arkansas. I figured we would do another mystery from the Natural State!

I've never been in an earthquake and I'm pretty sure I don't want to be. That said, I know I sure don't want to live in this part of the state...no matter how pretty it is! I like the ground beneath my feet to stay in one place, or at least I don't want to feel it moving! Sometimes I have a hard enough time standing up, so I don't need any help in falling down! 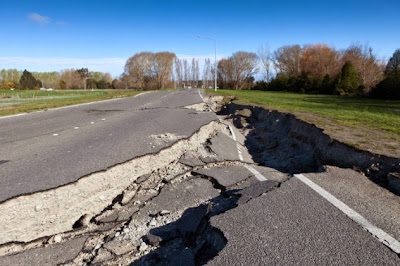 A small community just north of Little Rock, Guy wasn’t accustomed to drawing national attention. That all changed in 2010, when a series of relatively minor earthquakes shook the town. The first swarm struck in fall 2010, with most quakes registering under 2.0 on the Richter scale, meaning not everyone in town may have felt or even noticed the shaking. However, the swarms continued over the next two years and increased in magnitude, with one reaching as high as 4.7 in February 2011.

With the trembling becoming more noticeable, residents began to wonder if the quakes were a result of hydraulic fracturing techniques being used to drill for oil and gas in the area. The Arkansas Geological Survey was called out to investigate, and while the group noted that there is some evidence that fracking can cause minor earthquakes, they found no link between the drilling and these particular swarms.

Earthquake swarms aren’t entirely unusual in Arkansas. The state’s had a handful of them before, but none have reached the magnitude of those in Guy. Through 2013, over 500 quakes have rocked the town. As northeast corner of Arkansas was home to one of the country’s most violent swarms—the 1811-12 New Madrid earthquakes—the seemingly endless quakes have left some residents particularly on edge.

Now don't get me wrong here. I like rock and roll as much as the next fella, but I would rather have mine in the form of music, rather than in the movement of the earth! Don't want to take the chance of spilling my coffee, ya know?

Coffee out on the patio this morning. The sun is supposed to hang around most of the day and that's a good thing!
Posted by HermitJim at 12:00 AM

Years ago we lived right along the Ramapo fault line - not really big shakes, but you could feel the ground moving. I'll bring some raisin bread pudding for all!

We've had a few minor ones in our area in recent yrs. Nothing really note worthy, but enough to let me know. I wouldn't want to ive through a big one! Chickenmom's pudding sounds tasty...see everyone on the patio!

Years ago I lived in Southern CA and had the pleasure of experiencing earthquakes. No thank you, don't want to do that again. One was so strong it threw me across the room. Notice I don't live in CA anymore. See you on the nice stable patio.

I didn't know they had quakes there. I don't think I would care for that. We had some rumblings a long while back that were residual from CA. But with all the blasting the mines do or when they started building homes we really don't notice.

See everyone on the patio.

I don't like earth quakes. Nature can be pretty harsh at times. We should take better care of her.

We get them in NH strong enough to rattle the dishes. Rare but it happens.

I was in the big quake in Alaska in 64, they do get your attention.

hi. first i've heard of it. our 'news' is worthless consisting mostly of sports in which we have no interest. they almost never show maps and even the paper had no mention of these quakes that i recall.
we don't have cable either. have to get our news from you!
thanks
d h

hi. first i've heard of it. our 'news' is worthless consisting mostly of sports in which we have no interest. they almost never show maps and even the paper had no mention of these quakes that i recall.
we don't have cable either. have to get our news from you!
thanks
d h