Finally someone has come up with what just may be the best way to get a person on Mars!

Forget the NASA folks, the government guys, and all the others that can take forever to get anything done. This man may have solved the whole problem of hurrying things along. At least he is doing something, and now days that says a lot!

The First Human On Mars May Be A Reality TV Contestant
By Morris M. on Monday, December 2, 2013 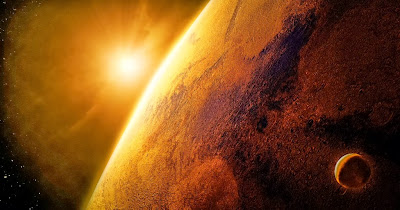 Right now, private companies are developing plans to land humans on Mars in the 2020s, and the race is on to find the first person in history to set foot on the Red Planet. As a way of raising funds for their planned 2023 mission, Dutch company Mars One is already planning to sell the global TV rights—with the hook that members of the public would get to vote for their favorite astronaut to be first on the Martian surface.

Reality TV has given us lots of things: Big Brother, Jersey Shore, Snooki . . . okay, so it hasn’t really given us anything much. But in the very near future, it might well give us one of the most iconic people who will ever live: the first human being on Mars.

Meet Bas Lansdorp, an eccentric Dutch entrepreneur and possibly a part-time genius. His Mars One project is an ambitious effort to land people on Mars by 2023, with a backup party arriving in 2025. It’s currently estimated that the cost of this insane undertaking will be around $6 billion—a price Lansdorp hopes to make up by selling the reality TV rights to the mission.

His plan is fairly straightforward and seems to be working. Ordinary people will apply as they would with any TV talent show. Meanwhile, networks will cough up the cash to get the project underway, having been promised the biggest broadcast event in history. Aside from monitoring the crew 24/7, viewers will be able to phone in and vote for their favorite astronaut to become the first human being on the Martian surface. Forget Neil Armstrong, the next deep-space legend may well be a Kardashian.

Understandably, NASA is skeptical of the plan and thinks there’s a good chance the astronauts will become sick, go mad, or even die. There’s also no way for them to get home at this point, so they might well be stuck there for the rest of their lives. But Lansdorp’s recent call for applications received 200,000 replies—suggesting this madman may be well on his way to making his demented vision a demented reality.

Crazy as this sounds, it may just be crazy enough to work. After all, if people are so wrapped up in some of the crap on television now days, I'm sure many would pay to watch this dog and pony show! Would you?

Coffee out on the patio again this morning. 65 and sunshine ain't too bad!
Posted by HermitJim at 12:00 AM

Labels: Live and die on Mars

No...I wouldn't pay to watch ! I'd just wait n read aout it on FB lol. I do worry that some of these crackpots will fall out of the sky n do major damage here on earth though......Patio is nice...it duppose to reac 60 here today but rain...got some chocolate chocolate chip with orange zest cookies if anyone is interested.

Maybe when Obama finishes with the health care system he can start on the mars project.

I'd rather send the Kardashians to the moon - it's quicker....
Patio sound great. It's cold and damp here. Cookies, Mamahen? Save some for me!

I would watch that crap for free. But I sure could volunteer a bus load of folks to go on this mission.

Today will be the last of our warm days. Starting tomorrow we will plunge down into low 30's at night and low 50's for the days
I'll be happy to join you all on the patio today for a while.

Where do we buy tickets?

Hey Mamahen...
I'm sure that sooner or later one or more of the jokers will come down in a blaze of glory!

I do love me some cookies! Bring 'em on!

Hey Sunnybrook...
I doubt he will ever finish, ya know?

Hey Phyllis...
Maybe we could start a shuttle for some of these folks!

Hey Jo...
I think we could all come up with a list of who should go!

Thanks, sweetie, for coking over today!

Hey Dizzy...
You want tickets to watch or to go?

Why to go, of course. If I can't get them, than I could just watch.

I'll take your 65 anyway. Cold and raining here today. I don't like most reality shows as I know they are scripted. Only one I watch is Duck Dynasty as I love their humor