I reckon we all have either seen or heard of or even watched the tumbleweed, right?

One thing that you might not know is that they are not originally from the U.S. at all! Surprising, isn't it?

A circular, brown weed rolls around like a ball in a barren desert—tumbleweed. The plant is an icon of the American West, helping to capture the popular imagination of the region. But the same dead weed roams around Russian landscapes as well, and that’s because tumbleweed isn’t native to the American West at all; it’s Russian thistle. 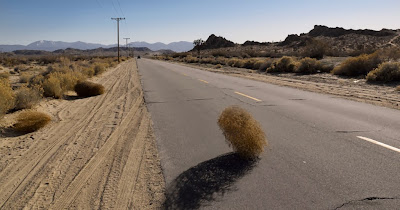 Tumbleweed is an icon of the American West, a staple in Western paraphernalia. It’s also an invasive species. The plant is not endemic to America, but rather the steppes of Russia.

Whatever the case, the Russian thistle proved extremely adaptable and more than a little bothersome. The outbreak began in South Dakota, receiving government attention by 1880. The infestations were menacing; some farmers were reportedly forced to abandon their homes. It wasn’t long before the weed spread to Canada and other states. By 1885, it had even reached California. Today, the plant is found to some degree in every state save Florida and Alaska.

A seed needs scant moisture to grow, and one plant can produce up to 250,000 seeds. The thistle can grow up to 90 centimeters (36 in) high. After maturing, by autumn, a gust of wind will break the thistle and send it rolling. These rolls will serve to scatter the seeds, which will also grow, break, and roll: rinse and repeat.

Other than being overwhelmingly pesky, build-ups of Russian thistles can cause fire hazards. Russia, Turkey, Uzbekistan, and the US are collaborating to combat the weed through biological warfare. Weevils, fungi, moths, or mites that prey on the weed in Eastern Europe may hold the key to fighting off Russian thistle, but the US has yet to approve introducing the species.

Though Russian thistle is incredibly invasive and annoying for one’s lawn fare, it’s not all bad: In the 1930s, starving animals had little else to eat as a result of the Dust Bowl. The thistle is also a staple in cattle, sheep, and bird diets.

Imagine! All the western sons and movies led us to believe that the tumbleweed has always been a part of the west. Boy, how wrong we were! Still, I can better imagine the tumbleweed in the Plains of the american west, than rolling around in the wilds of Russia!

How about coffee out on the patio this morning. High 70's with a sprinkle of rain, OK?
Posted by HermitJim at 12:00 AM

I remember seeing a news story on how that tumbleweed covered a house! Patio for coffee sounds nice - it's 25 here. I'll bring some Dunkins for all to enjoy!

I had no idea. Thanks for one more wonder.

I was grandma's heir to her monstrous tumbleweed that she hauled from Wyoming, 2000 mile trip. Yeek! Always be careful what you ask for - very stickery bush. Finally threw it in the fire barrel and good riddance. I'd hate to be accosted by one on a windy day; that's all I got to say!

I always thought it was a native species. Wow, how interesting. Save my spot on the swing, I'm on my way. Have a great weekend.

Those things are a pain in the neck. And yes nasty stickers. Can we round them all up and send them back to Russia?

Coffee on the patio sounds like a winner to me. Its raining cats an dogs here and is 47. I'll bring some Reese and kiss trees.

"Native", like "normal" is a matter of perspective I guess?

This was a good one, thanks!

WOW I would never have guessed that they weren't here from the start...Patio sounds great! Hope i'm not to late to grab a DD as well :))

Had them when I lived north of Fort Worth. Not only were the adult dried ones a problem but the young green sprouts were so tough that one small one would stall out my lawn mower.

Hey Phyllis...
I can believe it after seeing some of the pictures of them! Nasty little things!

Hey Sixbears...
I had no idea either! Learn something new every day!

Hey Sissy...
Not sure I would do if I was heir to something like that!

From what I've read, it's almost like they are alive during a wind!

Many thanks for coming by!

Hey Jo...
Guess you have a few around your area.

Don't know about gathering them all up. Maybe we should just leave them alone!

Hey Rob...
Glad you enjoyed it. Right you are about it being all about perspective.

Hey Momahen...
Still a few DD left. I figured they were here from the start as well!

I appreciate you coming over today!

Kinda curious that just about every envasive species, be it weeds, fish, snakes and so forth are all imported. Maybe a large wall around the borders is not such a bad thing after all.

I am afraid that three feet high is low in my experience in Washington State. I am 68" tall and many in the desert up there came up to my chin. They are a major mess up there and in Oregon. From experience I know to NOT try to ride my bike through one and bust it up.