Monday Mystery On The Sea...!

I don't think that I have covered this one before, but if I have it bears repeating!

The sea has always been a good place to find mystery stories, some even documented rather well. This is one of those cases!

The Mysterious And Elusive ‘Mahogany Ship’
By George Stevens Jr. on Friday, November 29, 2013 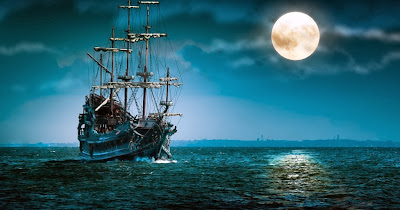 The most treacherous coastline in Australia has claimed over 200 ships. All have been documented and accounted for—except one. Several sightings of an elusive vessel known as “The Mahogany Ship” in the 1800s have intrigued archaeologists for years. The mystery ship is possibly Portuguese, which means it pre-dates Captain Cook’s trip to the South Coast and has the potential to re-write the history books as to who made it there first.

In Victoria, a state in southern Australia, exists the country’s most dangerous coast. In its history of explorers, immigrants, and traders, more than 200 ships have been swallowed. The coast is traversed by the Great Ocean Road, which is one of Australia’s most beautiful driving routes. It is from this road that the famous “Twelve Apostles” rock formations can be seen.

The coast is lined with small towns, beautiful bays, and views, and shipwrecks—lots of shipwrecks. Wreck Beach still holds a rock-encrusted anchor of one ill-fated ship, and museums along the coast exhibit many other treasures.

All these vessels have been recorded in the pages of historical documentation. Except for one.

In 1836, a wreck was seen by two men in the sand dunes near the town of Warnabool on the Shipwreck Coast. In itself, that was nothing unusual for the time, but the wood of this ship was dark. Darker than the woods normally used for a vessel. The rumor spread that the wood was mahogany, a material not known for being used in ship building. It became known both in official documents and in popular culture as “The Mahogany Ship.”

The ship was also described as looking very old, possibly Spanish, and of a very different type than was known to sailors in the 1800s. A storm was believed to have washed the sand off the ship allowing its discoverers (two shipwrecked men themselves) to see it.

The Mahogany Ship was sighted again 10 years later and reported by a Captain Mills. Mills is reported to have stood on the deck of the ship. However, once again, the wreck disappeared.

Over 30 sightings of the wreck were claimed until the late 1800s, but by the 20th century, the wreck seems to have disappeared completely. Its story became a mystery to the coast, and despite its obvious absence, made it a local icon.

Hope was not lost that the wreck would be found, and in 1992 the Victorian State government offered a reward of a quarter of a million dollars for its discovery. The reward has never been claimed, despite a number of reputable archaeologists investigating.

There is some importance as to the existence of this ship. The ship is possibly of Portuguese origin, and would pre-date Captain Cook (who didn’t discover Australia, but is supposed to have mapped the south coast). If found, it means a lot for the pages of history and who the real discoverers of the South Land actually were. Some believe that the ship was part of a secret Portuguese mission to find the fabled “Great South Land” that became Australia.

Other theories have been presented, but the truth remains a mystery. The Mahogany Ship remains one of a number of maritime mysteries in the Southern Hemisphere.

As much as I'd like to take the credit for this story, it was over at the site KnowdgeNuts that I came across the information! Have to give credit where credit is due, right?

How about coffee out on the patio this morning? Temps are in the 50's, so that's not too bad!
Posted by HermitJim at 12:00 AM

WOW!!! Hello hermit Long time. How are you?? Hope very well. You this post is very sensible for me. The tittle seems very mysterious.

Hey Glan Deas...
The sea holds many mysteries, my friend!

Hey Mamahen...
The world is full of many sea related mysteries! Tall tales abound, so they say!

Thanks for dropping over this morning!

A ghost ship! Good mystery for today, Mr. Hermit! How about I bring a carrot cake for all to enjoy?

I love a good sea mystery. One can't but help wonder what happened to the crew.

Good one today. I love mystery stories. So Monday is always something to look forward too.

It's only 45 here so sitting on your patio will feel much nicer than my porch. Pass the pot please.

As you said, the sea holds many mysteries and is very good at keeping secrets.

Love nautical lore (who'd 'a thunk it?), thanks for the story!

Thanks for stopping by this morning!

Hey Jo...
Cold front supposed to be coming back, but it's nice for now!

Hey Mayberry...
I never would have guessed! You have a good one and thanks for coming by this morning!