The name itself sounds almost comical, but I'll bet that the bite isn't! I know I don't want to find out!

The name would make this critter sound almost like a mere inconvenience, almost comical in nature, However, after reading this article from Listverse, I think you'll agree that isn't the case! 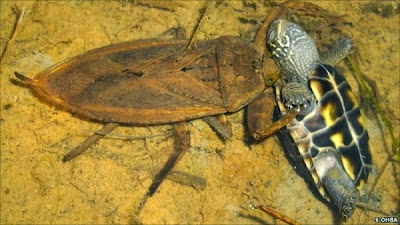 Giant water bugs are huge, freshwater insects that belong to a family known as true bugs. True bugs are divided into two types: plant sucking (aphids) and carnivorous (mosquitos). Giant water bugs may grow over 4 inches (10 cm) in length, and feed by injecting liquefying chemicals into prey items that include young turtles and small snakes. Giant water bugs bite humans with regularity, attacking swimmers or latching on to toes dangled in the water, earning them the folk name toebiter. The Schmidt insect sting pain index places giant water bugs as number four, the worst rated. Wasps are only two. Pain is only temporary, but the bite may cause permanent muscle damage.

This, my friends, is another reason I never go into any body of water without my shoes on! Rather wear an old pair of tennis shoes than get my toes nibbled on by some freaking bug that regularly eats turtles and snakes! I'm funny that way!

Coffee in the kitchen again this morning. I still have some peach pie left!
Posted by HermitJim at 12:00 AM

Can't imagine a bug bite worse than one from a wasp. Peach pie is perfect for today - save me a big slice!

There are nasty things in the water, yet I still go swimming.

My and I thought snakes were the worse thing in the water :/ Glad I don't swim much anymore. Peach pie in a cozy kitchen sounds great...26° here looking for a high of 28.....

I've seen these things they are big and ugly. Luckily have never been bitten. Of course I have been bitten by enough things so one less would be nice.

26 here too Mamahen, but at least we may warm up to about 57.
Just walked the dog so please pass the pot.

Glad they don't like salt water. Now all I have to worry about are sharks, stingrays, jellyfish, Portugese Man O War, barracuda.... : )

Nasty critters!We have smaller relatives up here abnd their bite is quite painful too. But they only bite if we provoke them, thankfully :-)

It kinda looks like a Texas sized cockroach. . . If I had to go into water infested by them, I would want more than just shoes on.

That is enough to keep me out of the water forever. Coffee inside sounds good as we are in the single digits here.

Hey Phyllis...
Wasp are nasty for sure! Almost makes me want to stay indoors!

Hey Sixbears...
Can't avoid being where the bad things are, I reckon!

Thanks for stopping in today!

Hey Mamahen...
Guess if we can't see 'em, we don't think about them as much!

Hey Jo...
There are some ugly critters under the surface! Glad you haven't been bitten, sweetie!

Hey Mayberry...
There are some big uglies in our salt water, that's for sure! I hate jelly fish and the man-o-war the most!

Can't dodge them all, I reckon! Thanks, buddy, for coming over today!

Hey Christer...
Guess they show up all over the world! Glad your's are smaller!

Many thanks for coming by today!

Hey Dizzy...
They do resemble a cockroach, don't they?

Almost calls for some armour!

Hey Linda...
Next they will tell us of the bad things hiding in the shower!

I got bit by a toe-biter when I had water day for my students at school last week. It has been really rainy and we have a retention pond near my classroom. This was the worst pain I have ever experienced in all of my 47 years. A week later and I still have swelling and numbness.