This may be something that many folks don't know, or at least don't think about much.

Most all of the folks I know like steak, even though we don't get to indulge in much due to the rising cost. However, the rising price of a good steak could be in part to the aging process, or rather which aging process is used! Once you get over the fact that all beef goes through a similar process, the taste is what you remember! Right? 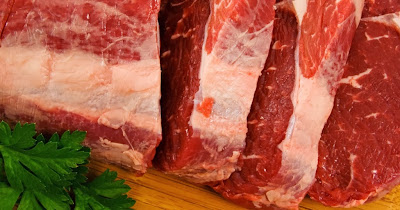 Beef from freshly killed cattle is far too tough for human consumption. It must first be aged, a nice euphemism for carefully controlled rotting that breaks down the connective tissue in the muscle. Dry-aged beef usually hangs for between one and four weeks, and has to be monitored, as mold and bacteria tend to proliferate on outer surfaces.

Those who grew up on a farm or rural area where there are few steps between the barnyard and the dinner plate will attest that fresh meat tastes worlds better than anything you can procure at the grocery store. This applies to most animals, chicken and pork being the most obvious examples. Beef, however, is the exception to the rule. The meat from a newly slaughtered cattle must be aged to allow the tough connective tissue of the muscle to be broken down by enzymes and microbes.

For centuries, beef was dry-aged, hung in an area where temperature and humidity could be controlled. Typically, the flesh hangs anywhere from a week to a month. Its outer surface dries out into a kind of crust similar in texture to jerky. Mold furs on the crust, the fungus giving the beef its signature “nutty” flavor profile. The humidity must be watched—if it climbs too high, the meat is liable to begin crawling with dangerous bacteria. Too low, and it will dry out. As the process wears on, bits of the crust are trimmed away until the cuts beneath are deliciously tender.

While most would agree that dry aging produces a superior taste, it has its downside. The process is both time- and labor-intensive, and trimming and evaporation of the meat leads to significant waste. To that end, toward the late ’60s and early ’70s, methods were devised to vacuum-seal the meat in plastic, thus quickening the process and ensuring that none of the product will be lost. Outside of fancy steakhouses, you can be all but assured that the beef you’re eating has been wet-aged. Because wet aging leaves the meat to marinate in its own juices, it is said to have a more bloody, sour taste.

I'll admit that once I had a true "aged" steak and I can still almost taste it to this day! Quality is hard to fake in some foods, and a great steak is one of those foods! I'd like to enjoy another steak like the one in my memory, but at today's prices I really can't afford it!

Coffee out on the patio this morning, providing the rain doesn't start for a bit!
Posted by HermitJim at 12:00 AM

The common method of hanging may also be the reason that the filet is so tender, since it's put in a stretch as it hangs. There was talk 30 years ago about hanging a carcass by all four feet, thus doing a better job of tenderizing the large muscles in the hindquarters, but I haven't heard any more about it. I suspect the filet would not have been as tender, plus it would have required larger coolers.

Hey Gorges...
Makes a lot of sense to me. The whole process is something that many of us never think about.

I can't even remember the last time I had a good piece of steak....
40 degrees here. I'll bring an apple sauce cake for all to enjoy.

My lovely wife found a nice piece of aged grass fed beef the other day. Good eating! The price, however . . .

I'm with CM. Steak is something we seldom eat. We have flood warings out for our. area thru tomorrow then snow. Of course i'm on a hill so flood won't affect me, but it may some of my family.....I'm having hot tea if anyone would like to try some. and that cake sounds yummy!

I once had some fresh beef and let me tell you I found nothing special about it. Yes it was tough but also had a very different taste not to my liking.
I don't get to eat steak very often due to the price. I just stand over the meat counter and wish.

Raining here on and off and chilly. expecting the temps to really drop by tonight. Need to cover my out door faucets.

But I can sit and have coffee first and that cake sounds really good.

I found chicken needed a day or 2 in the refrigerator to be a lot better than the fresh chicken.

Enjoy the patio while you can! Just think Winter doesn't even start for another 2+weeks!

Hey Phyllis...
It's been a while for me as well!

That cake sure sounds good!

Hey Sixbears...
The taste is great, but the price sucks!

Hey Mamahen...
I don't get steak very often, unless it's the chicken fried kind!

Hey Jo...
I drool at the meat counter like a kid at the candy store!

Hey Rob...
Seems to me that nearly everything taste better after a day or two in the cooler!

Thanks for stopping in this morning!

I do like freshly killed venison. Never could wait to eat it, so it didn't get aged.