Remember the movie "The Birds" by Alfred Hitchcock? That's what this story reminds me of.

Don't get me wrong. I like birds, I really do. But I might have to change my mind if I went through what this couple did. In fact, we all might have second thoughts about being a fan of our fine feathered friends! 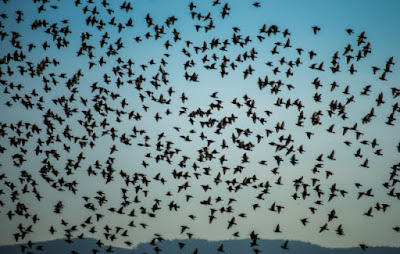 A California couple had just come back from a small vacation when they were astonished to find hundreds of birds all over (and inside) their house, just chilling out and enjoying themselves. They were everywhere and making quite a mess, as you can imagine. An ornithologist who was asked about the situation explained that they were a type of swift that tends to migrate at that time of year and had likely mistaken the couple’s chimney for a tree, where they would normally roost. Luckily they’re not any danger to humans even in such numbers, just a major nuisance.

They left the couple’s home before long but returned once more in large numbers, circling for a while before entering through the chimney. After shooing the birds out once again, the fire department installed a grate to ensure that none could get through. This didn’t stop the birds from attempting to get in again.

This may sound like an odd anomaly, but this couple isn’t the first to report large amounts of birds flying down a chimney and deciding to set up shop for a while. While it’s good that these kinds of birds are not dangerous, we certainly don’t want to imagine what it would be like to clean up the mess they must have left behind on their way out.

I don't know about you, but that is one mess I wouldn't want to clean up. This bird nightmare was found over at Listverse, of course!

Coffee in the kitchen. Kinda wet outside again.
Posted by HermitJim at 12:00 AM

Labels: attack of the birds

That's just creepy, Bet it cost them a small fortune to get that mess cleaned up. wonder if it was covered under their home owners ins.

I once had a huge flock of starlings land on my front yard. There had to be hundreds of them. You couldn't see the grass. They then took off and flew to my neighbor's place. Hasn't happened again which is fine with me.

Hey Jo...
You can bet the cost was outrageous. Better them than me!
Thanks for stopping by this morning!


Hey Momlady...
When that many get together, it can be impressive and scary! Makes you wonder what they are up to!
Thanks for coming over today!