So many times artifacts are found that no one can explain. Must be aggravating for the people trying to figure out their history. 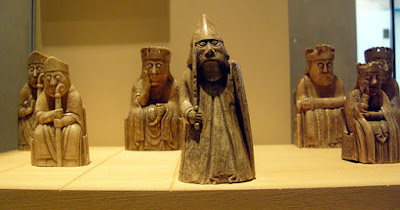 In 1831, chess pieces were discovered in a sand dune on the Isle of Lewis. They were carved from walrus ivory and whale teeth into small statues depicting royalty, bishops, mounted knights, warders, and pawns. Beautifully detailed and measuring 6–10 centimeters (2–4 in) in height, the four distinct chess sets were incomplete but had 93 game pieces in all.

Even today, nobody knows where they came from or who made them. While some people believe the origins of these sets are Irish, Scottish, or English, it’s most likely that Scandinavian hands formed the iconic pieces. The figures appear to have been heavily influenced by Norse mythology. The age of the artifacts dates from the late 12th and early 13th centuries, a time when Norway owned the beach where they were found.

Despite being over eight centuries old, the condition of these chess sets is pristine, almost like they were never used. Another theory is that the chessmen aren’t chess pieces at all but rather belong to a hnefatafl set, a game similar to chess. Whatever their true history, the Lewis chessmen remain one of Scotland’s most famous ancient finds and the largest known group of objects to survive from that era.

Isn't it amazing how some pieces like this can stay so nice when exposed to the elements for so long? The workmanship had to be way better than most of the articles we see around us now days.

Coffee in the kitchen this morning. It's still drizzling rain outside!
Posted by HermitJim at 12:00 AM

Nice to see the carved one...

I can't keep things that nice in my house.

They remind me of the Japanese netsuke figures.

I love those pieces and would love to have a chess set made with them. Wonder why the sets were never completed?

They are truely beautifully carved the detail is so sharp. great mystery.

Hope Mom's party was fun for her and all went well.

Nancy Marie Brown has written lots about these chessmen .. She has some great books about the Vikings and Iceland too.
I enjoy your blog muchly, very good stuff. Thanks

Hey WW...
Someone sure did a nice job on them, didn't tey?
Thanks for stopping by today!


Hey Sixbears...
I know exactly what you mean. The condition is unbelieveable for the age.
Thanks for coming over today!


Hey Phyllis...
Now that you mention it, they do!
Thanks for stopping in this morning!


Hey Linda...
Maybe they had to stop and go to war or something.
Thanks for the visit today!


Hey Jo...
Everything turned out pretty good! Lots of folks stopped in to say Happy Birthday!
Thanks for dropping by this morning!


Hey Craig...
Thanks for the heads up about this lady. I'll have to check her blog out!
Many thanks for the visit this morning!