We've all seen the face of Kilroy. It's been around for a very long time.Did you ever wonder just where it got it's start? Well, thanks to the folks at Listverse, I'm gonna tell ya! 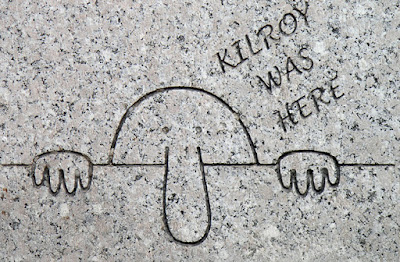 Funny how some things survived the war to become almost a permanent fixture of modern society, isn't it? It's comforting to know that some small symbol managed to show that the humor could endure in the soldiers in spite of the darkness of the times.

Coffee out on the nice, cool patio this morning!
Posted by HermitJim at 12:00 AM

Thank you for solving the mystery of "Kilroy". I always wondered how that cartoon got started. I still see it to this day in some of the places I visit. Would love coffee on the patio, save me a spot on the swing. I'll bring some Dunkin's.

That was an old time thing, I never knew this before and didn't know it went that far back.

We are very chilly here this morning and we are possibly in for a freeze tonight. Well this is what I have been waiting for, winter.
And I am up and running again makes me a happy camper.

Dad was a WWII Vet, that piece of graffiti or doddle always brought a quiet smile to his face.

Chilly here this morning in Phoenix so coffee sounds good. Linda M., thanks for the Dunkin's; I'll have a plain glazed one.

Interesting post, as always. But, I have a question. What did that fellow do with his own trolley car?

Hey Linda...
Some things almost seem timeless, don't they?
Thanks for stopping by today!


Hey Jo...
Symbol of the times, I reckon. Meant different things to many soldiers.
Thanks for dropping by today!


Hey Judy...
I would imagine some guys remember it fondly. That's a good thing!
Many thanks for coming by today!

Hey Dizzy...
I don't have an answer for that question. Seems like a crazy prize to me, unless he was going to rent it to the city or something.
Thanks for stopping by today!

Maybe he wanted to have the first motorhome (grin).