There has always been a fascination with folks that can do strange things with and to their bodies...like swallow fire and hot objects. The common term for someone like this is Fire-eaters.

This person was considered a superstar in her day, but suddenly she was no where to be found. Here is a bit of her story. 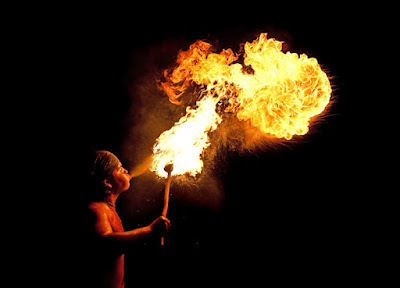 In the early 1800s, Jo Girardelli was the hot new fire act on the block. Taking on a whole new angle on fire acts, Girardelli was able to swallow red-hot objects without it causing her any pain or harm. Those who saw her perform were amazed at what was happening before their eyes.

Girardelli was able to “rinse” her mouth with nitric acid without it burning holes in her gums and cheeks. To prove that she really had the acid in her mouth and not some harmless fluid, she would spit it onto iron where it would immediately start eating through the metal. Girardelli also played around with boiling oil, filling her mouth with it and then spitting it out, causing a minor fire when it landed on wood.

Jo Girardelli didn’t stop there. All of her acts had to be bigger and better, so she started using hot wax and molten lead. She heated metal objects, such as shovels, over open fires and then pressed them against her skin. She even pressed her tongue against some of them. In all of these acts, her flesh remained just as it was before—completely unburned.

She remained a hot topic all over England, and no one was ever able to figure out just how she did what she did. Not even the skeptics were able to prove any trickery on her part. There is no record of Jo’s life after she moved from England, and her amazing acts remain as mysterious as ever.

Makes you wonder just where the fire eater went, doesn't it? Seems like history would have some mention of her somewhere, ya know?

Coffee out on the patio this morning, OK?
Posted by HermitJim at 12:07 AM

I still wonder how people can do stuff like that. I eat a hot pizza and have burns all over the roof of my mouth. That is strange that she just disappeared.

I can't stand anything hot in my mouth. So I have no idea how she could do those things. I wonder if she went to far with all this and did some damage to herself ending her time.

Hey Linda...
Some folks are pretty amazing with what they can do. Trick or not, it's pretty impressive.
Thanks for stopping in today!


Hey Jo...
I certainly couldn't do half of what she was reported to do. What's more, I don't intend to try!
Thanks, sweetie, for dropping by today!