Like so many others in the history of the old west, Cassidy was both real and legend.

No one knows for sure where the myth stops and the truth begins, but his life still makes for an interesting tale. With so many of the stories of men like Cassidy, it's hard to separate fact from fiction at times.

He might have earned part of his nickname while working in a butcher shop. 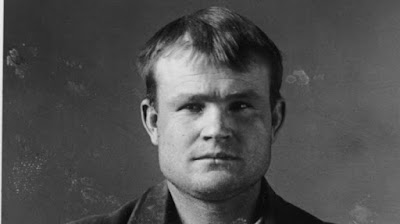 In the early 1880s, while working at a Utah ranch, Robert LeRoy Parker met Mike Cassidy, a cowhand and small-time cattle rustler and horse thief. Parker admired the older man, who taught him about training horses and shooting a gun. However, after getting into trouble with the law, Mike Cassidy fled the area, and Parker himself departed Utah in search of new opportunities after turning 18 in 1884. Over the next few years, he spent time in the mining boom town of Telluride, Colorado, followed by Wyoming and Montana. On June 24, 1889, Parker pulled off his first bank robbery, when he and several companions absconded with more than $20,000 from the San Miguel Valley Bank in Telluride. Not long afterward, Parker starting using the surname Cassidy, in honor of his former mentor, and referred to himself as Roy Cassidy. He eventually moved on to Rock Springs, Wyoming, where he landed a job in a butcher’s shop and, according to popular legend, became known as Butcher Cassidy, which morphed into Butch Cassidy.

Just another one of the characters that made the legend of the Old West what it is today. Part legend, part truth...and all interesting to study.

Coffee in the kitchen this morning!
Posted by HermitJim at 12:00 AM

Never knew that - so interesting how people get nicknames! Coffee in the kitchen is fine. I'll bring the Dunkins!

Very interesting story. I learned something new today especially since I loved the movie Butch Cassidy and the Sundance Kid. Cold, rainy and windy here again today. And my red maple tree in front still refusing to drop all it's leaves, Grrrrrr!!!!

I never knew this, see keep on leaning here.

It is colder today than yesterday morning at 29 degrees. See you all in the kitchen

Hey Phyllis...
Like you say, people get their nicknames in some crazy ways! Kinda like grandparents, I reckon.
Thanks for stopping by today!


Hey Linda...
I wonder why the maple is holding on to it's leaves? Maybe you should show it a calendar or something.
Thanks for coming over this morning!


Hey Jo...
Hasn't gotten really cold yet here. 70s in the day and 50s at night. Just good sleeping weather!
Thanks for dropping by today!

It is amusing how nicknames get started. Like mine, for instance. I have been called Dizzy since back in the '60s. Got that nickname from other hams because my ham radio call ended in "DZY".