Since this is Freaky Friday, I found the perfect story to share. I certainly think it qualifies.

Now I know that Texans are known to stretch the truth a tad from time to time, but this time I have pictures to back up the story. Just saying... 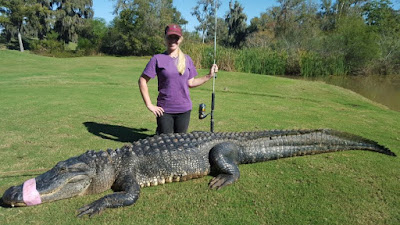 Gator wranglers Christy Kroboth and "Gator Chris" rescued this 12-foot, 600 pound alligator at Riverpointe Golf Club in Richmond, Texas outside of Houston on Wednesday, Nov. 18, 2015. The duo nicknamed the animals "Chubbs," after the golf coach in "Happy Gilmore." It will be reintroduced back into the wild in a safer location soon.

On Wednesday, Houston's most popular gator wranglers were summoned to the River Pointe Golf Club in nearby Richmond to snare Chubbs, a 12-foot, 600-pound gator that was recently hanging out on one of the greens at that golf course. This month the world learned of the exploits of Houston’s own Gator Chris and his assistant Kroboth, who have made a name for themselves in the Houston area for alligator wrangling and conservation of the misunderstood beasts. Video of Kroboth subduing a dangerous 12-foot alligator near the First Colony Commons Shopping Center in the Sugar Land area while police looked on went viral earlier this month. The whole thing made Kroboth somewhat of an internet celebrity, with Kroboth getting interview requests from all around the country.

On Wednesday the pair sent the Houston Chronicle photos of their most recent adventure: their capture of Chubbs on a local golf course. By the way, the name Chubbs comes from 1996’s comedy hit “Happy Gilmore” starring Adam Sandler. If you’ve seen the film you might remember the fate of Sandler’s golf instructor. Luckily no instructors or golfers at the club met the same end.

Chubbs will be relocated by the gator wranglers to more hospitable digs, likely Larry Janik's alligator farm at Janik Alligators in the El Campo area. The pair are licensed and insured Alligator Nuisance Control Hunters for Texas Parks and Wildlife.

I've been wondering just how many golf balls could a 600 pound 'gator eat? Must be a lot, I reckon!

Coffee out on the patio this morning. No 'gators around, I promise...
Posted by HermitJim at 12:00 AM

Could get a couple pairs of boots out of that one!

That is a lot of boots and purses. Wouldn't want to meet him on the green. Since you patio is gator free I'll be over. Save my spot on the swing. Have a great weekend - I'll be shoveling snow.

The like to play in Florida and North Carolina also according to my brother who is a golfer.

Not what I want to find on my course, Bubba. If I did, he could have all the balls he wanted ...my clubs, even the cart if he so desired! I'm not gonna argue!
Fun pic - thanks ~
Big hugs -

Now that's a big boy there. Not something I would care to walk up on.

Now I understand what they mean by a "water hazard!"

Hey Phyllis...
I'd say you are right about that. Probably a wallet out of the extra!
Thanks for stopping by today!


Hey Linda...
Sorry to hear about your snow, but at least it keeps the 'gators away!
Thanks for coming by this morning!


Hey Momlady...
Guess that's another reason to not play golf.
Thanks for the visit this morning!


Hey Sis...
I'll go along with that. Take it all and leave me an escape route!
Thanks for stopping by today!


Hey Jo...
Pretty good size, for sure! Hope he stays out of my yard.
Thanks, sweetie, for dropping by today!


Hey Gorge...
Kinda clears up a few terms, doesn't it?
Thanks for the visit today!

If the gator ate the golf ball, what are the rules of play? Do you have to hit the gator to the next hole or what? (grin) I never played golf so I don't know the rules.