The Case Of The Missing Brains...!

Isn't it amazing that some institutes can lose something like a hundred or more human brains? Seems a bit strange to me, but what do I know?

I know that many of us have heard about Einsteins brain going missing, so I have to wonder what the problem is with brains and why is it so hard to keep track of them. It's not like you can accidentally run them through the wash cycle, or leave them in the garage, ya know? Something seems to be a tad off, if you ask me. 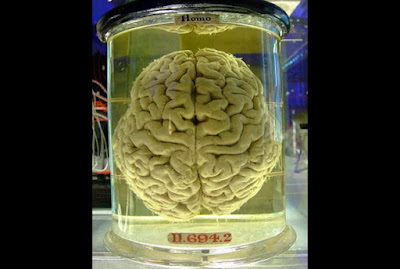 In the 1950s, the Austin State Hospital (formerly the Texas State Lunatic Asylum) began collecting the brains of its deceased patients to determine if mental illness had a physical component. These brains were preserved in jars that were carefully labeled with the patients’ names and diagnoses, with around 200 specimens canned and shelved over approximately 30 years.

In 1986, storage space was becoming a problem. The hospital offered to give the brains to anyone who wanted to use them as a research tool. With major universities vying to get them, the collection was eventually transferred to the University of Texas in 1987.

Among the brains was that of Charles Whitman, the infamous ex-Marine who climbed a tower at the University of Texas in 1966 and started shooting. By the time he was shot dead by police, Whitman had already killed 16 people and wounded 32 more. Earlier, he had killed his wife and mother. Whitman left a note requesting that someone look at his brain to find a reason for all the thoughts he’d been having. Later, it was discovered that he had a brain tumor. In the mid-1990s, researchers took a look at the university’s collection of brains, which had only been gathering dust until that time. When they searched for Whitman’s brain, they couldn’t find it. Along with about 100 other brains, it had disappeared.

Various people at the university came up with different excuses to explain the missing brains. The possibilities included that the brains had been moved, thrown away, placed in storage elsewhere, or returned to the state asylum. The state said they never got the brains back.

According to a December 2014 update, between 40 and 60 of the brains were destroyed by the university because they had degraded to the point of being unusable for research. However, the university said that Whitman’s brain was not among them, now claiming that they had never received his brain in the first place.

Call me crazy, but if I were in charge I'd want to know just what happened to all those missing brains. Evidently someone isn't keeping very good records, or there is a thriving black market for human brains that we don't know about! Are we maybe feeding a zombie colony somewhere?

Now that IS strange!!!! You find the most interesting articles, Mr. Hermit!

That is very strange index. How does a someone misplace that many brains? Was anyone ever held accountable for this? Now if I most something that belonged to my hubby my head would roll for sure. Since it is very dreary here this morning how does some fresh baked bread sound; I'll bring some to share, along with some honey.

Strange, makes you wonder if leaving your body to science is worth it. And how can they claim they never had this guys brain but know he had a brain tumor?

It was 30 degrees here in the Old Sunny Pueblo so I guess it's your patio this morning.

I look in my ear every morning, and so far it's still there, I think

Hey Phyllis...
Sometimes it takes a lot of searching to dig them up, but other times it's like they find me!
Thanks for stopping by today!


Hey Linda...
Fresh bread is always welcome at my house, that's for sure! It's a mystery for me how that many brains (or anything else medical) could get misplaced.
Thanks for coming by today!


Hey Jo...
I was wondering the same thing. Seems like a contradiction, doesn't it?
Thanks sweetie, for dropping by today!

A black market for famous (or infamous) brains... why not?

In the Portland/Vancouver area & heading south today I think.... It's a damp 40 degrees this morning...

I have been told a few times that my brain must be missing. . .