It seems as though there is a little known competition being waged about which drink is preferred by the Brits and the Americans. The answer may surprise you!

I never thought about it much until I found this article over at Listverse. As far as I know, most of the folks in my world prefer coffee as a hot drink and tea as a cold one. That thought may be wrong according to this article.


Brits Are Tea Drinkers, Americans Are Obsessed With Coffee 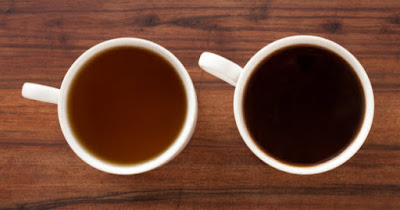 Nothing highlights British and American differences quite like their respective national drinks. Go-getting Americans swill more coffee than any other nation on Earth while refined Brits relax over an afternoon tea.

At least, that used to be the case. But new research shows that many Americans are falling out of love with the fabled bean. In its place, they’re turning to drinking copious amounts of tea.

In 2014, the US imported more tons of tea than Britain for the first time in modern history. (Yes, the US has a lot more people, but the point is they’re catching up.) Among young people, tea is fast becoming the drink of choice. A recent YouGov survey found that tea and coffee are equally popular among 18- to 29-year-olds, with 42 percent choosing coffee as their drink of choice and 42 percent preferring tea. By contrast, 70 percent of those over 65 would rather have a cup of joe.

Admittedly, the US still has a long way to go to catch up with the UK. In terms of per capita consumption, only Turkey and Ireland drink more tea than the British. But things are changing, especially among the young. Another YouGov survey found that only 39 percent of 18- to 24-year-old Brits put tea as their drink of choice. That’s lower than among similarly aged Americans.

Now don't get me wrong. I've tried to drink a cup of tea in the morning, but in my case nothing gets the ol' motor going like a good hot cup of coffee. Guess I'm a lost cause.

Coffee out on the patio this morning. Of course, I'll find some tea for ya, if that's your thing.
Posted by HermitJim at 12:00 AM

I've tried coffee every way imaginable, but I STILL can;t stand the flavor of it, though I like the scent.

Tea is fine for later in the day, but a good cup of Joe is what's needed first thing in the morning.

Sometimes I even make it in the perk pot - the aroma is just wonderful!

Is caffeine the actual item you are chasing? I decaffeinated 30 years ago and really like the non-dependence of being decaffeinated.

I too have tried tea in the morning. Doesn't work for me. I need my coffee. Tea as a drink is my choice for the afternoon.

I noticed the research was done on the younger generation. I wonder what would have been the results if they asked our generation. I like my coffee must admit I have cut back for some reason, tea is for when I am sick.

I love strong, strong, strong black coffee. Did I say I like it extra strong? The only way I like tea, is iced. Prefer iced tea unsweetened but will drink it either way. I was in British Columbia, Canada one time and ordered ice tea and they served it so sweet it was like a syrup.

Hey Linda...
Gotta have my coffee. Without coffee, I have no personality at all!
Thanks for stopping by today!


Hey Jo...
I think the report said that folks over the age of 60 preferred coffee. Sounds about right to me!
Thanks, sweetie, for dropping by today!


Hey Dizzy...
Sounds like your taste in coffee and mine run along the same lines. I don't like my tea too sweet and NEVER with lemon!
Thanks, buddy, for coming over today!

dizzy, are you sure you were in the north and not the South? sweet tea is a big thing there.
mr. hermit i will bring my own green tea if you will provide the hot water. thanks.

Get daily suggestions and guides for generating $1,000s per day FROM HOME totally FREE.
GET FREE ACCESS TODAY