Thanks For The Pizza Bag...!

Here is another styory about a woman inventor and the contribution she made to all of us using home delivery for pizza.

The carry-all for pizza is one of those things I never gave much thought to, ya know? Makes you appreciate it just a little more when you know the history. I can't afford home delivery pizza anymore, so I switched over to Digiorno which I like better anyway. It taste as good and is way cheaper than any home delivery around here. Half as much, in fact! 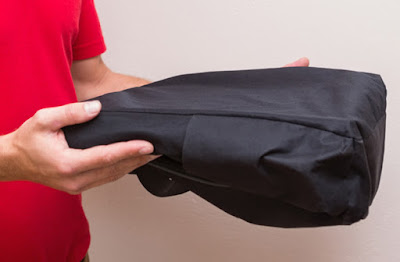 If you’ve ever had a pizza delivered, then you owe a debt of gratitude to Ingrid Kosar. Before Ingrid came along, chains like Domino’s and Papa John’s had a tough time delivering pizzas because no one knew how to keep the food warm during the long trek between the restaurant and the customer’s front door.

Some people wrapped the pizzas (which were already in cardboard boxes) in blankets. Some even kept sterno heaters in the backseat of their cars which, obviously, was kind of dangerous. Fortunately, Ingrid Kosar had the perfect solution, an invention that revolutionized the delivery business. Ingrid created the pizza bag.

Inspired after finding a lunch bag made of padded cotton, Ingrid teamed up with a friend named Bill Seliskar, and the two started mixing and matching fabrics in an effort to design the perfect pizza bag. To test her inventions, Ingrid actually bought multiple pizzas and drove them around town in her prototype pouches, trying to keep the pies at 60 degrees Celsius (140 °F) for 45 minutes.

In addition to retaining heat, Ingrid needed to create a bag that was easy to grip, could hold several pizzas at once, and would prevent any grease from dripping out. After quite a bit of tinkering, Ingrid started her own business in 1983—Thermal Bags by Ingrid—and after an aggressive PR campaign, she convinced Domino’s to place a $10,000 order. Soon, she was servicing other chains like Papa John’s and even providing bags for the US military. According to Ingrid, her products showed up in “outer space aboard a shuttle mission” and “inside the White House kitchen during President George H.W. Bush’s term."

Unfortunately, things have gotten difficult since her patent expired in the early 2000s and other companies started making cheaper, inferior knock-offs. But despite competition and bankruptcy, Thermal Bags by Ingrid is still alive and kicking. So the next time you have a pizza delivered, remember to thank Ingrid for keeping your dinner nice and hot.

Who would have ever thought that so much research was given to the humble pizza bag? I certainly didn't knbow!

Coffee out on the patio this morning until the rain starts again!
Posted by HermitJim at 12:00 AM

I guess she got tired of cold pizza! Good story, Mr. Hermit! Stuff we really never think about!

Now I know who invented those infamous red pizza delivery bags. Leave to a woman to think up such a clever idea. Great story. Have a great weekend.

to bad she didn't know when to get out. Even though her bag is a better one the cheaper always wins out. but good job on her part.

38 degrees here hope it's warmer on your patio

Hey Phyllis...
Leave it to a woman to create a very useful way to keep food warm.
Thanks for stopping by today!


Hey Linda...
Always good to know these little tidbits of information. Never can tell when it may come in handy!
Thanks for coming by today!


Hey Jo...
I guess that is the biggest problem in any business. Competition can be a business killer!
Thanks, sweetie, for dropping by this morning!