Very few women have inspired the imagination of the early west like Annie Oakley. Seems as though her popularity is still alive and well in some circles.

A recent auction of some of Annie's artifacts brought in a pretty hefty sum just because they once belonged to her. Not bad for a woman that died in 1926, wouldn't you say? 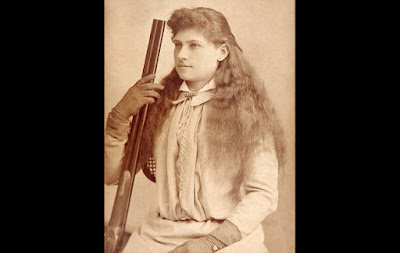 A rare 12-gauge shotgun that Annie Oakley once used to dazzle Queen Victoria fetched the hefty sum of $143,400 at auction yesterday. Made by Parker Brothers, the weapon is thought to have accompanied the sharpshooting celebrity when she traveled to England with Buffalo Bill Cody’s famed Wild West show in 1887. During that tour, Oakley performed for European royalty attending the queen’s Golden Jubilee.

According to Heritage Auctions, which handled the sale for Oakley’s descendants, Oakley became disenchanted with the Parker Brothers shotgun midway through her overseas stay, later presenting it as a gift to her husband’s brother.

Born Phoebe Ann Moses in an Ohio cabin in 1860, Oakley demonstrated an extraordinary gift for marksmanship at an early age. At 15 she won a shooting match against a traveling exhibition sharpshooter named Frank Butler, whom she soon married. The pair began performing together and eventually joined Buffalo Bill’s touring company. Oakley continued to set records well into her 60s; she also campaigned for women’s rights to work, participate in sports and bear arms. She died in 1926 at age 66.

Roughly 100 items that once belonged to Oakley, including the Parker Brothers shotgun, were sold in Dallas, Texas, by Heritage Auctions on Sunday. Featuring rifles, letters and photographs, among other things, the collection was put up for sale by the famous sharpshooter’s great-grandnieces. They had inherited the artifacts from their mother, Billie Butler Serene, whose grandfather was Frank Butler’s brother.

“We had decades worth of treasures in steamer trunks,” said Terrye Holcomb, one of the descendants. “My mother cherished her family, and when the family passed, this is what she clung to.”

Along with the Parker Brothers gun, other big-ticket items included a Marlin .22 caliber rifle that went for $83,650 and Oakley’s iconic Stetson hat, which brought in $17,925. The entire collection sold for $518,875.

“The intense interest and great prices this auction brought show the ongoing fascination people have with Annie Oakley and highlight the value of 125 years of careful stewardship by her loved ones,” said Tom Slater, director of historical auctions for Heritage Auctions.

Always find it amazing that some of the older legends of the Old West had a factual person at the core. This lady made a huge impression on a lot of people, all over the world.

When I was a little girl Annie Oakley was my idol. Thanks for sharing her information with us all.

There are some conflicting stories wrottem about her, but her name still over rides them..

Not to cold here but I'll have some coffee with you all on the patio. Then make another cheese cake so all the baking for today will be done. Killing me to have all these cheese cakes in the fridge and I can't even have a piece. but I could steal one away for the patio

Hey Linda...
She was my oldest sister's idol as well.
Thanks for stopping by today!


Hey Jo...
Hearst newspapers tried to slander her and she sued and won 54 out of 55 lawsuits! Tough ol' gal!
Thanks for dropping by today!