Now this next story is hard for me to get my head around...maybe because I like to nap.

I found this article over on Listverse. 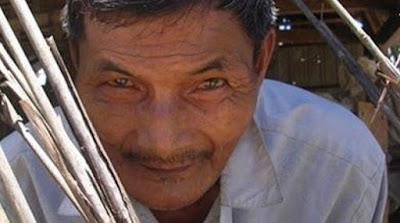 Vietnamese farmer Thai Ngoc suffered a fever in 1973, which seemed like nothing much at first. When the fever cleared up, he had developed a bad case of insomnia. Thinking it would go away in a week, he didn’t give it much thought. Now, over 40 years later, he hasn’t slept since the night of the fever. After over 12,000 nights of no sleep, you would think he’d be dead. However, after examinations, the only thing wrong with him were minor liver problems. The only complaint from Ngoc was that he’s a little grumpy from not experiencing sleep for over three decades. He tried countless home remedies and even tried drowning himself in alcohol. Nothing seems to work. So why is his insomnia persisting for so long?

One of the explanations could be a phenomenon called “microsleep.” Micro naps occur when a part of your brain gets tired and decides to quickly take a few seconds to nap. Most everyone has probably experienced these when tired—our brain temporarily shuts off and then goes back on again. Falling asleep while driving is a good example of microsleep. This could be how Ngoc has been getting by for so long.

Now I'm just the opposite here. I get sleepy when I read, when I watch a movie, even when I watch the occasional T.V. program. Doesn't take much to get me to nod off, ya know?

Coffee out on the patio this morning. Still waiting on the cold front.
Posted by HermitJim at 12:00 AM

Labels: no sleep for 40 years

Don't know how I would react. I like my nap in the afternoon when I can get one and definitely need a good night's sleep.

40 yrs! Oh I don't know what I would. I'm like you my Friend reading or TV puts me to sleep.

52 here this morning but it sure doesn't feel like it and will top out at 80 so where is this cold front they keep promising us? Might as well enjoy the patio while we can

Hey Momlady...
I certainly hear ya on that! I can see where he might be a little grumpy.
Thanks for stopping by today!


Hey Jo...
Maybe he should try one of our cures, ya reckon? Still waiting for our cold front as well.
Thanks for dropping by today, sweetie!

Now that something!!! Just think of all he could have gotten done if he could work around the clock for forty years.

Hey Dizzy...
Being a farmer, I reckon he had to wait for the rain and plant growth. Had plenty of time for hobbies, though.
Thanks for the visit today!