I've posted about this stuff before, but that was way back when it was called "star jelly!"

The last time the information was old and outdated. Even this information is newer, it isn't much more helpful than what we had before. 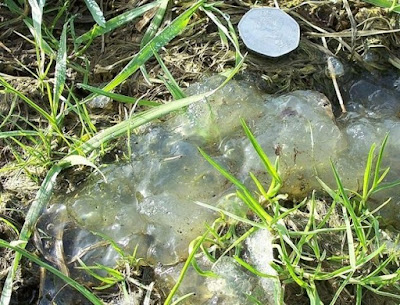 Scientists were stumped by the strange jelly-like slime that appeared in a nature reserve in Somerset, England, in 2012. The bizarre substance was found in several locations. Experts were unable to explain its origin, although a few guesses were hazarded. The reserve’s spokesman, Tony Whitehead, suggested the slime might be Nostoc, a form of cyanobacteria.

Other guesses held it might be the regurgitated viscera of amphibians and their spawn. Whitehead said, in past centuries, the substance was “known variously as star jelly, astral jelly or astromyxin,” and folklore associated it with meteors. Other speculations suggested it lacked DNA, although it appeared to be alive. Experts didn’t know what to make of the slime. Visitors to the reserve were warned not to touch the substance, whatever it was.

You don't have to tell me twice to not touch the stuff...I intend to leave it alone! I don't know what it is, where it came from, and what it might do! I flashback to the movie with Steve McQueen called "The Blob", ya know?

Coffee out on the patio again today!
Posted by HermitJim at 12:00 AM

"The Blob" was the greatest movie. You are right about this stuff. I don't want anything to do with it. Don't need this stuff getting into my system - I have enough problems without slime invading me also. Haha Looks like we may get some sunshine today. It is 32 degrees right now.

Chilly this morning but not as chilly as Linda's neck of the woods. But some good company and nice hot coffee should warm us up.

Hey Linda...
It was good, wasn't it? Better than the remake, I think. 32 already? That's too cold!
Thanks for stopping by today!


Hey Momlady...
Now that's an interesting thought!
Thanks for coming over today!


Hey Jo...
I think they decided that it wasn't from a plane because of the color or something!
Thanks for dropping by, sweetie!

I think I'd call it "Gesundheit"!

Hey Sixbears...
Sounds very likely to me.
Thanks for the visit today!


Hey Kyddryn...
Long time, no see! How are ya doing, girl?
Thanks for stopping in today!