The idea of being confined to a nursing home or an assisted living facility just doesn't do much for me...at all!

I would much rather have the freedom to wander around my own home, keeping my own counsel, and living by my own rules. I guess that this was brought to mind because yesterday was my birthday and I began to ponder my own mortality a bit. Another reason to avoid places like nursing homes are mentioned in the article from Listverse that I found. 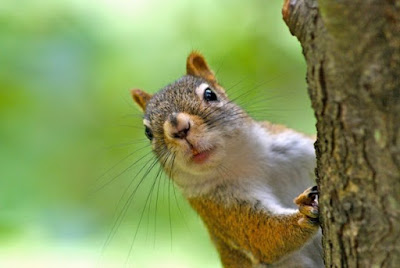 In 2016, a 911 operator in Deltona, Florida, received an unusual call from the Sterling Court Gracious Retirement Living center, with reports of staff and elderly residents being viciously attacked. The assailant in the unprovoked rampage was soon identified as a rambunctious squirrel with a penchant for causing mayhem. After biting a woman outside the nursing home, the furry creature made his way indoors, where the assault continued. “It’s jumping on people and biting them and scratching them,” the 911 caller said. “It’s still in there and people are bleeding.”

After the animal’s thirst for blood was quenched, the suspect fled the premises, leaving two residents and a staff member with “serious squirrel bites.” In the days following the attack, the lives of the traumatized victims began to return to normalcy, only for the squirrel to come back with a vengeance. This time, however, a staffer armed with a BB gun shot and killed the squirrel, bringing an end to the chaos.

Such brutality caused by wildlife pales in comparison to what happened to a resident of Brookdale Senior Living Center in South Carolina, also in 2016. While enjoying the scenery of the local pond, 90-year-old Bonnie Walker was torn apart after being attacked by an alligator. What was left of her remains was removed from the pond after staffers had realized that Walker was missing from the facility. The alligator was removed as well.

Any wildlife around me I would want to be of my choosing. Out of control tree rats, or alligators looking to ambush helpless old folks aren't real high on my list of critters I want around, ya know?

Need to be careful when animals are around our house. I have enjoyed seeing squirrels eating their food. I love their fluffy tail...

Having passed beyond the 70 year milestone myself... I understand.

I prefer my squirrels outside, and alligators not at all.

Happy belated birthday, HJ. Hope you had a good day and enjoyed your cookies. I doubt a nursing home is in your future. I shoot at the squirrels here all the time. They've tried to eat my porch!

I prefer that the squirrels not even visit my yard as they have totally destroyed my yard with their constant digging and burying of nuts. If I didn't live within city limits I would shoot those pesky buggers with my pellet gun. I know they are cute and their antics are funny at times, but please just quit digging up my yard. Again, Happy Birthday the cookies were good.

I've heard horror stories from nursing homes before but never like this!

Happy Birthday!! Another successful trip around the sun completed...

Usually the worse thing about nursing homes is their dangerous under staffing.

Another cool morning. All the leaves have left the trees. Oh well, gives me a better view of the lake.

Hey W.W...
I'll have to admit they are fun to watch, especially when my cats try and catch one.
Thanks for stopping by today!


Hey Kathy...
Getting older ain't for sissies, is it?
Thanks for coming by this morning!


Hey Sis...
Yeah, certainly don't need them in the house like the possums.
Thanks for the visit yesterday and for coming by this morning!


Hey Momlady...
Wonder why they would eat the porch? Maybe they went a little "nutty!" (Sorry, couldn't resist)
Thanks for the visit this morning, my friend!


Hey Linda...
They can mess up a yard pretty quickly, that's for sure.
Thanks for stopping by today!


Hey Rob...
This story is definitely sad and ...different. Yeah, one more time around!
Thanks for stopping by this morning!


Hey Sixbears...
Hopefully I'll never have to experience that firsthand.
Thanks for coming over this morning!

Sounds like a rabid animal to me. Scary stuff poor people. I'm with you I want to stay in my own home. As you know I moved in to take care of my dad at his request until his death. I don't know if I would get that.

Internet trouble again this morning finally came back up after much ado with Century Link.
they sure can ruin your day. Going to start baking here.

That must have been a very, very powerful BB gun to kill a squirrel. Pellet guns can kill but the BB gun I use to chase the squirrels just bounces off but does get them moving very fast in the opposite direction. BTW, back in my hunting days, I loved the taste of squirrel. Around here, if times get really bad, I will not go hungry (grin).