Sad And Creepy Story Of Ruby...!

Dolls have been favorite playthings for many children for a long time and many have become sought after by doll collectors over the years.

However, many dolls have become the center for stories of hauntings and possession and just downright creepiness! Here is one such story about a doll named Ruby. 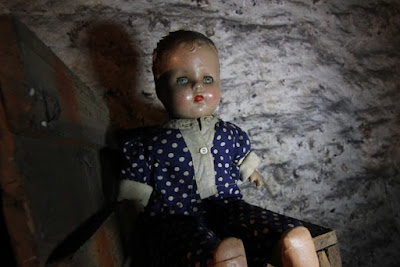 The story of Ruby is a bit more sad than creepy. It is said that Ruby was the favorite possession of a little girl a long time ago. The little girl got very sick and eventually died with Ruby in her arms.[8] Ruby was then passed on through generations of the little girl’s family, more often than not ending up in a box in a basement because of her less-than-cute appearance. Also, the family members claimed that Ruby walked around, made weird noises, and, much the same as Peggy, caused nausea and headaches.

Ruby eventually ended up in the Traveling Museum of the Paranormal and the Occult, where even stranger things started happening. Almost half of all visitors to the museum started taking Ruby in their arms and rocking her and comforting her as you would do with a crying baby. When being made aware of what they were doing, the visitors would be shocked, not having realized their actions. One visitor also found a picture of Ruby on her phone after visiting the museum, and she swears she didn’t take any photos of the doll. It is believed that the little girl who died is still connected to Ruby somehow and is making her presence felt with the help of her favorite doll.

My mother was a doll maker, as you may know, and she left many dolls here when she passed. My sisters, nieces, grandkids and everyone else I could think of was allowed to take any or all of the dolls with them. Very few did, however. I still have about twenty or so dolls here, nearly all with handmade clothes. I reckon that no one plays with dolls, even with porcelain handmade ones.

Coffee out on the patio this morning. Almost hot outside today!
Posted by HermitJim at 12:00 AM

Wow, did not know that about your mom. You're right when you say very few play with dolls today. It's I-phone and video games. Kinda sad really.

Hey Momlady...
So many of the older ways of playing are disappearing, along with anything else with age. I guess the androids and cyborgs are the new dolls of this age. Sad to see dolls go away like that, though.
Thanks for stopping by today!

What a sad way for that poor little doll not to be kept with the little girl after death.
I remember that your mom made dolls and had her gatherings with her dear friends. But it is sad that kids today don't get into playing like we did as kids and they don't cherish things of their departed family. I bet those dolls are beautiful.

A little warmer here to this morning maybe because of the cloud cover. But I will come and sit on the patio

Old dolls, like clowns, creep me out just a little.

Cool this morning, but the rain has finally stopped.

Hey Jo...
I can't help but wonder what is going to happen when the grid goes down for an extended amount of time? How will kids entertain themselves. No interest with board games or toy soldiers or dolls, etc. We used to play with even the empty boxes! Our biggest asset was our imagination.
Thanks, sweetie, for dropping by today!


Hey Sixbears...
I think that deep down, most of us have a bit of that same feeling.
Thanks for the visit today!

Bubba, I still have many of mama's dolls, as well as several of my own that were well played with, but none look as sad as Ruby, thank goodness. That is creepy.
Clowns and dolls don't bother me. I decorated my son's childhood bedroom with clowns, and he had many clown toys. Remember the first jack-in-the-box toy, a clown as I remember. I still have a large painting done by sister Sue of a clown, done for J's bedroom. Nowadays I can't even give the thing away. Wonder who started the thing with "creepy clowns"? There's something for you to investigate!
Big hugs on a sunny, then dreary Saturday - too hot!!

Hey Sis...
I have to admit that Ruby is in sad shape. I think the clown toys of years past are cute and many are fun.
Right you are about it being way too hot for this time of the year. Didn't have much Fall, that's for sure.
Thanks for coming over today!

I think that deep down, most of us have a bit of that same feeling.