Sometimes decisions made in the spur of the moment turn out to be monumental and deadly. Such was the case with the massacre at the Marias River. 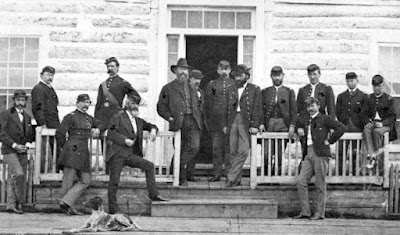 The deadliest massacre of Native Americans in Montana’s history was a mistake. Colonel Eugene Baker had been sent by the government to “pacify” a rebellious band of the Blackfeet tribe.

Eventually, Baker’s men tracked the tribe to a village along the Marias River. On January 23, 1870, the men surrounded the village and prepared to attack.But a scout recognized some of the painted designs on the lodges and reported to Baker that this was the wrong band.

Baker replied, “That makes no difference, one band or another of them; they are all [Blackfeet] and we will attack them.”

Most of the Native American men were out hunting, so the majority of the 173 massacred were women, children, and the elderly. When Baker discovered that the survivors had smallpox, he abandoned them in the wilderness without food or shelter, increasing the death toll by 140.

The photo on this post is of Baker's men. I wonder if many of them had trouble sleeping at night after this engagement. Probably not.

Coffee out on the patio once again today.
Posted by HermitJim at 12:00 AM

What a "wonderful" fellow.

Unfortunately that attitude has moved forward to today regarding "African-Americans".

"I wonder if many of them had trouble sleeping at night after this engagement. Probably not."

Read some of the journals of the Jesuit missionaries of their first encounters with the tribes of the upper Mid-west.

Reports in gruesome detail the Long process of torturing their captives (ie. starting with fire to the genitals)

What shocked the Jesuits was not the torture methods themselves, having knowledge of the Spanish Inquisition decades earlier, but who was charged with the duty of torturing the captives.

The women and children.

Not known if this was the case with the Blackfeet tribe mentioned in your story, but it was common practice for the women and children to start removing the genitals off the dead after a victory (ie., Custer's last stand).

Hey Gorges...
A real winner, so it would seem.
Thanks for stopping by today!


Hey Momlady...
Guess we will always find someone to hate on . Seems to be our way.
Thanks for coming over today!


Hey Joetentpeg...
I have never been a fan of killing someone just because they are different. I couldn't sleep at night if I had that attitude. That's why I ask the question I reckon we are all a bit prejudice in our own way.
Thanks for the visit this morning!

These stories make me sick and yes we still have these no count people who get there kicks killing because they think they have the right because they wear a uniform of any service they managed to get into.

I'll join in the nice hot coffee this morning.

Hey Jo...
I guess this type of folks have been around all through our history, but I don't pretend to understand their behavior at all.
Thanks for dropping by today, sweetie!

Have to disagree on the whole with Momlady today. I don't think this attitude is pervasive today in regards to Blacks. But the idea itself of murdering folks just because of their ethnicity is more reminiscent of Nazi Germany.

I hate violence of any kind, but if someone where to threaten my family (including my pups), I would get violent very quickly.