Here Is Another "What Is It" For Thursday...

Something like this pillar is seldom found here in the states, especially in a National Forest.

One can only wonder what the original purpose was and who exactly made them. Just gotta love these types of historical mysteries, especially from an area so close at hand. 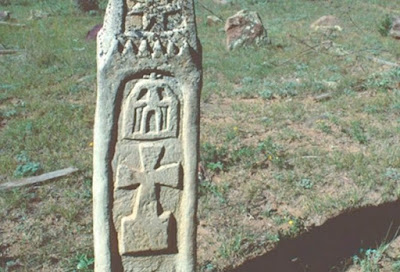 Historian Louis Serna spied a ornate stone pillar in a hotel lobby in 2013. Intrigued by the symbols (including a Templar cross) carved on it, Serna tried to find out more about the pillar from the hotel employees. After being told that it was simply a trail marker, Serna realized he would have to get into contact with the original owner of the hotel if he was to get credible information. He was right. After he traced the original owner, the man told him that a rancher discovered the pillar in a New Mexico forest and that it had been on display at the hotel ever since.

Suspecting there was even more to this story, Serna eventually approached the US Forest Service, where he was informed that, in fact, there were two stone pillars found in Carson National Forest and that the second pillar is located among several other stones thought to be grave markers.

Serna remained skeptical about this information, believing that the pillars may have been markers used by ancient explorers during the colonization of the area. Serna also remains hopeful that archaeologists will look into his theory and come up with answers to explain the origin and purpose of the pillars.

I can't help but wonder if the other stones are really grave markers, and if they are something different, then what are they?

Coffee out on the patio this morning. Getting to be a habit, isn't it ?
Posted by HermitJim at 12:00 AM

It could have just been a grave marker for a member of that lodge, or sign that the whole cemetery was for such folks.

My guess is a grave marker.

Because of the cross I would guess grave marker.

Hey Gorges...
I tend to think along the lines of a trail marker of some kind...I don't know why.
Thanks for stopping by today!


Hey Linda...
I can see it as a very different type of grave marker.
Thanks for coming over this morning!


Hey Momlady...
That seems to be the most thoughts on the pillar. Seems like a strange place for it, though.
Thanks for the visit today!

Another mystery for sure, Bubba. But rather attractive, no matter the reason for its' being.

I have visited many very old cemeteries here in southeastern and southern AZ. I have seen some tall like this but not with those markings, I agree Gorges.

I kinda of side track here while reading about this, just had the most beautiful sunrise so had to grab the camera. Patio sounds wonderful to me

Above the cross, is that a guy in box with a small propeller on top? When all other explanations fail, think "aliens" (grin).

Another post about the pillars with some interesting comments.
http://www.abovetopsecret.com/forum/thread1172925/pg1

If you ever find any more information please do another post. Most interesting.