The Temple Of Reason...!

Imagine an ancient, hollowed out oak tree with a temple built inside. Wild, huh?

That's the story from Listverse about the Chapel Oak in France . Pretty amazing place, judging from the pictures. 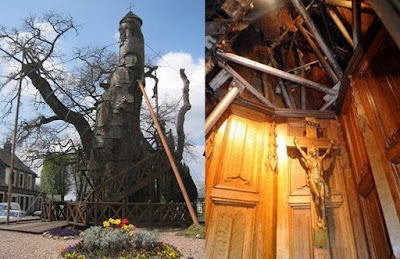 Elsewhere in France, there is an ancient church which eschews the use of stone at all. Chene chapelle (“Chapel Oak”) is located in Allouville-Bellefosse in northern France. The whole church is built inside an enormous oak tree.

A spiral staircase surrounds the tree and leads to two separate tiny chapels. Although trees have been used for worship in many places, this tree’s holy use came about in a unique way.

The oak tree is at least 800 years old. According to local legend, however, the tree is as old as the kingdom of France itself and William the Conqueror prayed under its branches before he left for England. In the 17th century, the tree began to be used as a chapel after lightning hit it.

The lightning ignited the wood inside the tree, burning it away. This left a hollow but still-living tree. Taking this as a divine sign, the local abbot and priest had the shell of the tree converted into a chapel.

When atheist revolutionaries threatened to burn down the tree, locals rescued it by renaming it a “temple of reason” to fit with the beliefs of the French Revolution.

Coffee inside the kitchen this morning.I'm baking me some birthday cookies, so it smells good!
Posted by HermitJim at 12:00 AM

You come up with the most intriguing stuff. Happy Birthday to whomever you are baking cookies for and have a Happy Thanksgiving.

That really is a very unique church. Whoever thought of a chapel inside a tree! Happy birthday to the recipient of your cookies.

Hey Momlady...
I'm glad you find it intriguing, my friend. BTW, the cookies are for ME! Today is my birthday, so these are MY cookies! Don't worry, though...I'll share.
Thanks for stopping by today!


Hey Linda...
It definitely is different. Very pretty as well. Thanks for the birthday wishes and for coming over today!

Yes that it a very beautiful church the workmanship is gorgeous.

48 here this morning and yes Fred got his heater turned on. And then it will be in the 80's today that's desert living for you

What a unique way of making use of an old tree. Happy birthday to you Jim. I guess you just turned 21 and now you can celebrate with a drink (grin).

Hope you have a lovely birthday!

Enjoyed today's birthday visit with you, Bubba. Promise no nuts in the next batch of cookies!