Most everyone in the South (and probably other parts as well) know what June bugs are.

Here around my house they can be seen in the Spring, climbing on the screens and generally making a pest of themselves...no pun intended. I would say that I can't remember them ever causing an epidemic, though. Here's a case where some folks thought otherwise. 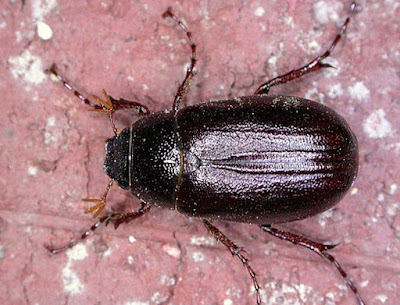 Here’s an odd one. The June bug epidemic refers to an incident in summer 1962 when a worker in a textile mill in the USA claimed to have been bitten by some sort of dangerous insect. Convinced that the latest batch of fabric that the mill had received from England was infested with creepy critters, the woman refused to go back to work. She complained of headaches, dizziness, and a painful rash. Before long, more than 50 of her colleagues were also insisting that they had been bitten by the elusive “June bug.”

Understandably, the mill was closed down for inspection, and officials from the Centers for Disease Control (CDC) in Atlanta were dispatched to deal with the outbreak. But to their surprise, they could find zero evidence that such a creature even existed. The health inspectors found only two biting insects in the entire plant, neither of which could have caused the symptoms described by the workers.

Despite this dumbfounding discovery, they decided to have the mill sprayed for insects anyway. After all, there was nothing else they could do. But the most incredible part of the story is this: After the mill had been sprayed and reopened, not a single person complained of June bug bites again. Was there really something hiding in the fabric?

Something sounds a little fishy about this story, if you ask me. I've been around June bugs all my life, playing with them, picking them up and such. Never had one bite me that I know of.

Coffee in the kitchen. Kinda cool on the patio and it's misting rain.
Posted by HermitJim at 12:00 AM

We have June Bugs here in WI and I too have played with them and picked them up. Never, ever was I bitten. This story seems very suspicious to me - like someone trying to get out of work or get money from the Company. High winds today; hope I don't blow away.

Hmmmm, sounds fishy to me. June bugs aren't any problem here but stink bugs sure are.

The larva of the June bugs can cause irritation on my skin I found out the hard way.

My kids used to play with them and never had a problem. Now Barney may have something there. Maybe the company and the inspectors didn't want that to come out.

Coffee in the kitchen sounds fine it is chilly this morning and I haven't even opened the windows yet.

Hey Linda...
Does seem a little suspect, doesn't it? Maybe it was something else!
Thanks for stopping by today!


Hey Momlady...
Wow...I hadn't thought of stink bugs in a long, long time. Hope I can forget them again!
Thanks for coming over today!


Hey Barney...
Isn't the larva of the June bug called grub worms? If so, we used them for pretty good fish bait.
Thanks for the visit this morning!


Hey Jo...
Yep, he could be on to something, for sure. The whole thing is very strange to me.
Thanks for dropping by today, dear!

Yep HJ they are grub worms. My friends did not have trouble with skin irritation and mine was not really bad. I still fished with them but washed my hands better right after handling them.

My wife knows they are harmless, but they really freak her out. Just one of those things. I think the factory infestation was more mental than physical.


Hey Sixbears...
Sometimes folks just have that reaction to critters. I believe you are right about the mental thing.
Thanks for stopping by today!