Who would believe that some of the original tools used in the Senate are 200 years old? I'm talking about the gavels, not the politicians!


The U.S. Senate Has Been Using the Same Ivory Gavels for Over 200 Years
They only got a second one after Nixon broke the first. 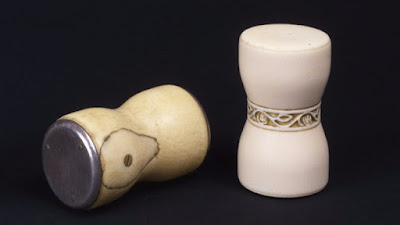 WHEN THINGS GET UNRULY IN a courtroom, the judge can grab his gavel and start hammering on the podium to get everyone’s attention and restore order. It’s not so terribly different in the United States Senate, where they’ve been using the same ivory gavels in their attempts to bring order for over 200 years.

The U.S. Senate has a number of hidden traditions (we see you, candy desk) and historic artifacts that have been in use for generations, but perhaps none symbolizes the body’s adherence to its own past more than the senate gavels. While the Speaker of the U.S. House of Representatives generally uses a traditional mallet-style gavel, often comically over-sized and prone to breaking, the leaders of the Senate floor have only ever used one of two hourglass-shaped mauls since the assembly began in the 1700s.

No one is quite sure of the exact origins of the first Senate gavel. “Many of the tools that the Senate uses have long been considered just that. Tools of the legislative process,” says Melinda Smith, current Curator of the United States Senate. “At the time that they were acquired, nobody ever thought that they would be such prized possessions or that there would be such intrigue to them. We haven’t yet found that golden nugget of information. We have a lot of leads, but none of them are on a record.” Smith adds that traditionally it’s believed that the original ivory gavel, or one just like it, has been used since the Senate’s first meeting in 1789.

The original gavel, which measures two-and-a-half inches tall, was used through the 19th century and well into the 20th century. According to the Senate website, the old ivory nub had begun to fall apart by the 1940s, after over a century of use. Then in 1952, the original gavel was reinforced with silver plates affixed to both ends. But even with the extra support, the gavel was in trouble.

Just two years after the silver pieces were added, it finally broke for good. It was during a late-night debate on whether or not to allow the commercial use of nuclear power. Then-Vice President Richard Nixon took hold of the gavel to call the room to order. Slamming it down, a large chunk of the ivory hammer chipped off, although the breakage likely had more to do with wear and age than any over-exuberance on Nixon’s part. “He just happened to be the person who was holding it,” says Smith. “It could have been anybody.”

In an attempt to salvage the historic gavel, the broken chunk was screwed back on, but the gavel was no longer fit for government work, and the hunt for a replacement began. According to a New York Times article from 1982, it was Nixon himself who went searching for a suitable piece of ivory that could replace the one that had broken in his hand. After a few (no doubt unruly) gavel-less months, the Vice President of India, Sarvepalli Radhakrishnan, presented the assembly with a replacement ivory gavel that looked nearly identical to the original save for a decorative floral collar etched around the pinched middle. He said that he hoped it would lead to debate “with freedom from passion and prejudice.”

Let's hope that the future gavels are only used in common sense debates, and last at least as long as the originals.

Coffee out on the patio where it seems that Spring has come back with temps in the mid 80s.
Posted by HermitJim at 12:00 AM

What an interesting article. I had no idea these gavels were in use. Thank you for enlightening me. Would love to sit outside as it is still cold and now very damp here. I'll bring some donuts for all to enjoy.

Such historical tidbits you find! We're having a heat wave here in GA. Temps in the mid 70's! Mmmmmmm, donuts.

Hey Linda...
Donuts are always good! Looks rainy here, but we'll still take a chance and sit outside!
Thanks for stopping by this morning!


Hey Momlady...
I love looking for them and sharing. Makes my day, so to speak.
Thanks for coming by today, my friend!

Not the only thing Nixon broke during his political career!

Nice tidbit of history. Thanks Hermit!

Hey Sixbears...
Glad you enjoyed it!
Thanks for the visit today!

Yes Nixon was another wonder in the White House and he hadn't even been the President yet.

Patio sounds wonderful. Here we are still 10 degrees above the average for this time of year but it sure is nice to not be using the A/C until very late afternoon for just a bit.

May the gavels continue to be in use for another 200 years, for the same purpose.

Hey Jo...
Nixon was certainly different...at least, I think he was.
Thanks, dear, for dropping by today!


Hey Sis...
It is a little too warm for this time of the year, that's for sure. But at least it's not raining.
Thanks, sis, for the visit today!

Not the only thing Nixon broke during his political career!