Herman was one of those children that was kidnapped by the Indians, but didn't want to leave and go back home.

He had become so much a part of his adopted tribe, he was made a warrior and minor chief. Wanting to stay with their captors was not all that uncommon. Many refused to leave, or ran away when returned to their true families. Here is Herman's story from Listverse. 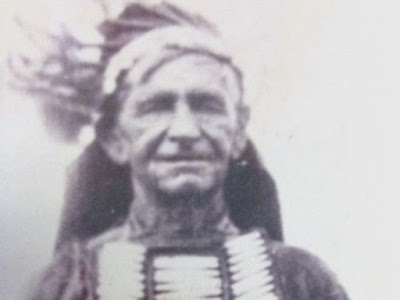 Herman Lehmann didn’t see himself as a white boy living among the Apaches. To him, he was an Apache warrior through and through. He was kidnapped at age ten, and it changed him so much that when he was found eight years later, he couldn’t even remember his own name.

By then, Lehman was a respected warrior in his tribe who called himself “En Da.” He’d been made a petty chief for his ability to fight, and he’d joined the Apaches in raids and battles, even leading a charge right into a fort full of Texas Rangers.

All that changed, though, when a medicine man killed his adoptive father, an Apache warrior named Carnoviste. Lehman took his revenge and killed the medicine man. He then had to flee into the wilderness. For a year, he lived alone, hiding from the Apaches and the white men alike, until he finally settled down in a Native American reservation.

When his mother heard there was a white-skinned, blue-eyed boy on the reservation, she came out, praying it was her son. At first, she didn’t recognize him, and Herman was less than friendly. “I was an Indian,” he explained, “and I did not like them because they were palefaces.” But Herman’s sister spotted an old scar only he could have and, overcome with joy, cried out, “It’s Herman!”

The sound of the name puzzled him. Somehow, Herman thought he’d heard it before. It took a long moment, Herman would later recall, before he realized that he was hearing his own name.

No one knows for sure what made the captors stay when given the choice...but it was their choice and should have been allowed.Just my opinion, of course.

Coffee out on the patio this morning, but you better bring a sweater!
Posted by HermitJim at 12:00 AM

Native culture was a lot more fun than white culture. Maybe we should all run off and join them. Hope they can fit us in.

For many I think it was the only way of life they remembered. They had friends and "family" among the captors, so why go back to the unknown. Just my thoughts on the subject. Cold here with frost on the ground.

Wonder if it was the same for girls/women.

Hey Sixbears...
Kinda like running away to join the circus, huh?
Thanks for stopping by this morning!


Hey Linda...
I think you are right about that, Linda. The unknown is always a bit scary.
Thanks for coming over this morning!


Hey Momlady...
From what I read in the article in Listverse, it was.
Thanks for the visit today!

Quanah Parker's (famous Comanche) mother was a captive....
https://en.wikipedia.org/wiki/Cynthia_Ann_Parker
I guess "home" & "your life" is what you accept and make yours.

I was reading "Ancient Rome on 5 Dinar a Day", they were talking about slaves in Rome (40% of the people) and a town that Caesar captured. He turned to a slave trader next to him & sold all 52,000 people in that town to the slave trader.
I've tried to imagine how much those lives changed that day but it's beyond me. Talk about a new life...

Hey Rob...
She is listed on the article from Listverse I was mentioning to Momlady. Making the best of what they had, I reckon.
Thanks for stopping by today!

I have read a few books about these captives. And yes some stayed and some died shortly after being captured as they couldn't keep up with the harsh treatment. Different tribes treated the captives differently. A few did make it back to their people.

Little chilly here too it rained all night smells so good this morning. See you on the patio

There is syndrome that many hostages get, it is called the Stockholm syndrome.

Hey Jo...
I think the main difference was if they were treated as slaves, or were adopted as part of the family and tribe.
Thanks, dear, for dropping by today!


Hey Dizzy...
Hadn't thought of that. Very possible!
Thanks for the visit today!