Ever wonder if many of the unsolved mysteries we experience get solved? It would appear so.

According to Listverse, the oldest unsolved mystery in America has been solved. Better late than never, I reckon. 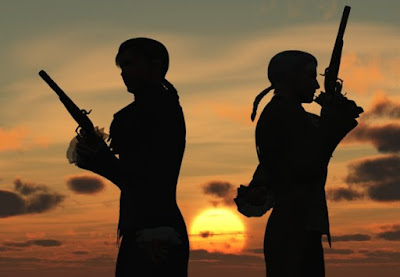 In 1607, Jamestown, Virginia, became the first permanent English settlement in the Americas. For the last two decades, it has also been at the forefront of Colonial America archaeology since the Jamestown Rediscovery Project led to the reveal of the ruins of the original James Fort. Originally slated to last only ten years, the venture has been prolonged indefinitely due to the continued discovery of new artifacts and knowledge.

Part of the findings in 1996 included the skeleton of a young man given the designation JR102C. He had been shot in the right leg, and the lead bullet was found alongside the remains. His 400-year-old death became an unsolved murder.It took over 17 years since his rediscovery, but in 2013, forensic archaeologists announced that they had identified not only the victim but also his killer.

They believe JR102C was shot in a duel, as he was hit in the side of the knee, suggesting he was positioned sideways. Based on records and other evidence, researchers named George Harrison as JR102C and a merchant named Richard Stephens as his killer.[10] The two took part in a duel in 1624, in which the latter shot the former in the leg, with Harrison subsequently dying of blood loss.

Well, that's one more unsolved mystery out of the way. Now only a million or so left to solve, right?

Coffee in the kitchen this morning. A little chilly out on the patio.
Posted by HermitJim at 12:00 AM

Sometimes I wonder why men had to prove their "honor" in a duel. We never know why. Interesting, though, that the mystery was solved.

So glad they solved that mystery. Now if they could just solve some more recent ones. Finally getting some sunshine today after a weekend of rain/snow cold and windy.

Hey Momlady...
Guess they just wanted an excuse to shoot at someone. Who knows?
Thanks for stopping by today!


Hey Linda...
That would be nice, wouldn't it? I guess it's one mystery at a a time.
Thanks for coming over today!

If I read this right the killer never gave the guy a chance to turn completely around to have his shot. But the killer also was a lousy shot.

50 here this morning but we are going to have another heat wave coming this way by Thanksgiving. Nice hot coffee is needed this morning.

See you tomorrow to celebrate your big day!

Hey Jo...
I think the common stance for a pistol duel was to stand sideways, making it harder to hit the target. Must have worked in this case, at least a little.
Thanks, sweetie, for dropping by today!


Hey Dizzy...
Glad you enjoy them, Dizzy!
Thanks for coming by today!


Hey Sis...
Always happy to see ya, sis. I'll make some cookies!
Thanks for the visit today!

Glad to hear that mystery is solved! I love Jamestown... actually grew up in Virginia (Tidewater area) and recently visited my sister who still lives there.

Hey Kathy...
I'm glad that you decided to join us again. I always like meeting new friends for coffee.
Thanks for stopping by today!