Sometimes the strangest things can be found totally by accident. That's what happened in this next article from Listverse.

When it was found, no one seemed to know what it really was, or where it originated from. It wasn't small either, as is usually the case when unknown objects are found. 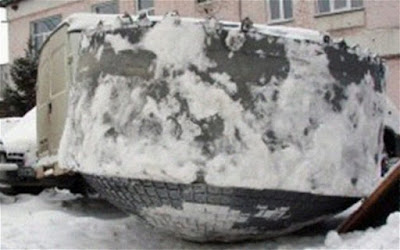 In 2012, a walk in the forest turned strange for locals from Otradnesnky village. They found a metal object bigger than a car. It was cylindrical and U-shaped, with one end tapering into a dome with ridges. The inside was visible, but it was empty. Assuming the 200-kilogram (440 lb) artifact had fallen from space, the villagers dragged it back to Otradnesnky. Local inspectors could not identify it and called the authorities in Moscow.[8] Rumors about the “UFO fragment” thickened when, in the dead of night, unspecified powers removed the object and placed it under armed guard.

Russia’s space agency Roscosmos examined the piece. They declared it was not space technology nor radioactive and was partially made of ultra-strong titanium. NASA’s initial assessment ran along the same lines. Despite agreeing it was probably not part of a spacecraft, NASA made it clear they needed better data and images for a definite identification. Whether Roscosmos provided its American counterpart with more details is hard to say. Media releases beyond the original year and story are rare.

Pretty strange find, I'd say. What's even stranger is the way they showed up in the middle of the night and placed the thing under armed guard. I find that curious, to say the least!

Coffee in the kitchen this morning. Chilly out on the patio.
Posted by HermitJim at 12:00 AM

Good morning. Hope you have a beautiful day!

Hey Kathy...
Pretty strange object, that's for sure!
Thanks for stopping by this chilly morning!

Well now another strange object from the sky and no answers.

It is a chilly morning isn't it. I'm up for coffee in the kitchen with you.

That domed part appears to have heat resistant tiles (for re-entry) similar to the space shuttle. So, I would guess that it was made to return from orbit in tact. I wonder if there were any writing on in Chinese???

Somebody (maybe everybody) isn’t telling everything they know. Color me very suspicious.

Hey Jo...
Seems like we get a lot of those sky things at times, doesn't it?
Thanks for dropping by today!


Hey Dizzy...
We will probably never know.
Thanks for coming over today!


He Terry...
I think you are right!
Thanks for the visit!