What compels someone to stay with people that originally treated you as a slave? Some just didn't want to leave after a while.

Although the lifestyle might have began with rough treatment, soon many of the captives came to look to the Native Americans as their adopted family. That was the case with Francis. 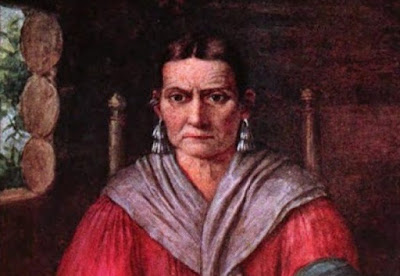 In 1835, a trader named George Ewing met an elderly woman of the Miami tribe named Maconaquah. She was in her sixties and a respected woman among the tribe, a widowed grandmother whose husband had been their chief. And so you can imagine his surprise when this old woman told him she had born to white parents.

As a child, he soon found out, Maconaquah’s name had been Frances Slocum, the daughter of a Quaker family who had been stolen away from home by Seneca warriors when she was five years old. A Miami family had bought her for a few pelts, and they’d raised her as their own.

57 years had passed since her capture. She’d grown up among the Miami, gotten married, seen her husband rise to chiefdom, given him four children, and raised them until they had children of their own.

Frances’s brothers hadn’t stopped looking for her since the day she was captured. When word got out that she was still alive, her brother Isaac met with the sister he’d lost decades ago and begged her to come home.

Frances, though, had forgotten how to speak English. Communicating through an interpreter, she told him, “I do not wish to live any better, or anywhere else, and I think the Great Spirit has permitted me to live so long because I have always lived with the Indians.”

True to her word, she stayed with her captors until the day she died—and she was buried next to the man who had been her husband.

Bottom line here is that she just flat out did not want to go anywhere. She had lived with and made her home with the Indians for so long, it was the only life she knew. Can't say I blame her.

Coffee out on the patio again this morning.
Posted by HermitJim at 12:00 AM

I believe there were many like that. Perhaps that's why there are light-skinned native Americans.

I really don't blame her either. This was the only life she remembered Why should she leave it just because some strangers, who happened to be her blood relatives, want her to live with them. Cold and raining here. I am having my second cup of coffee.

Hey Momlady...
You may be right about that. Probably more of them than we know about.
Thanks for stopping by today!


Hey Linda...
I can't really blame her either. Hard to leave your family after 57 years and go face the unknown.
Thanks for coming by this morning!

Good story once again about white captives I shouldn't think after all those years she would want to go live elsewhere.

54 here but sunny and will heat up to high 80's we are breaking records or staying just below the record highs for this time of year. I'm not impressed.

Right, Linda. Blood is not always thicker than water, to which Bubba Hermit and I can well attest. Hubby and I have our "tribe" (term picked up from Sixbears) of friends and close neighbors to whom we can turn at any time. Not to exclude the Hermit, but a 2 am emergency can better be served by a tribe member across the street than family 45 minutes across town.

Jo, we're also in the 80s, and I'm holding on until the weekend when we should get a "cold" front.

Home & family are what they are. I wonder if the brothers ever really understood that?

Hey Jo...
Seems pretty hot in most places in the states for this time of the year. Doesn't appear that much cooler weather is in our immediate future, either.
Thanks for dropping by today, dear!


Hey Sis...
Good idea to have folks close that you can count on, or call on. Looking foward to that "cold front" due in this weekend.
Thanks, sis, for the visit today!

Hey Rob...
I would be willing to say that they didn't see it that way.
Thanks for stopping by today!

She lived with the Indians since she was five years old, so she really didn't know any other life other than living with that Indian tribe. Now be honest, how many things do you remember before you were five years old?

Hey Dizzy...
Like I say, I don't blame her at all. I would have chosen the same.
Thanks for the visit today!