Many times a true , original discovery is made by scientist purely by accident. Often they are searching for something completely different.

It doesn't hurt that many of these experiments are conducted by men considered by most to be a few bricks short of a full load, if you know what I mean. Here's a good example from Listverse. 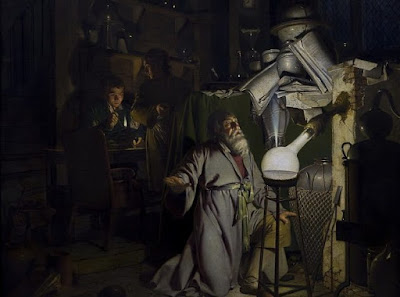 Chemistry is known today as a factual and difficult science, but its early days were filled with decidedly unscientific methods. Before the arrival of proper chemistry, it was the science of alchemy which reigned supreme. Alchemy held the belief that some substances could be transmuted into gold. In 1669, an alchemist named Hennig Brand convinced himself of the possibility of transmuting urine into gold. He quickly gathered the pee of his wife and her friends and began a process of boiling 5,700 liters (1,500 gal) of urine in his basement.

Brand didn’t discover the secret to creating gold, but the boiled urine did have the odd attribute of glowing in the dark. After utilizing an alchemical process which involved letting the cold, glowing urine sit and emit gasses, Brand finally arrived at a white substance which we know today as phosphorus.

See what I mean? Many times it was like the old saying "the porch light is on, but no one is home!" Kids...don't try this at home!

Coffee out on the patio again today. Spring type weather still around.
Posted by HermitJim at 12:00 AM

1500 gallons of his wife & her friends urine in his basement? That is different.. (I hope!)

I can't imagine the smell of all that boiling urine. UGH!!!!!!! You just never know about some people.

Who knew urine contained phosphorous ? The smell must have been something! Ew.

Hey Rob...
How do you go about collecting that much from other folks?
Thanks for stopping by today!


Hey Linda...
Does sort of boggle the mind, doesn't it? Bet it was fragrant.
Thanks for coming over this morning!


Hey Momlady...
The man most definitely was off his rocker. Mad as a hatter, as they say!
Thanks for the visit this morning!

Glad I wasn't around his neighborhood when that was going on.

50 degrees here this morning then up to 80 so your place sounds a little warmer than mine for coffee on the patio this morning.

Hey Jo...
That weather ain't too bad there. However, you are always welcome on the patio here with me and the rest of the group...you know that, sweetie!
Thanks for dropping by today!

I can't imagine 1500 gallons of urine. How long, I wonder, did it take hem to collect that much???