A Pirate Story For Saturday...!

We haven't had a good pirate tale in a while, so I decided to post one today.

Actually it's more a story about a part of Captain Kidd's lost treasure and I think it might surprise you some. Who knew that they carried as much wealth on their ships as they did. Guess they didn't worry too much about getting robbed. 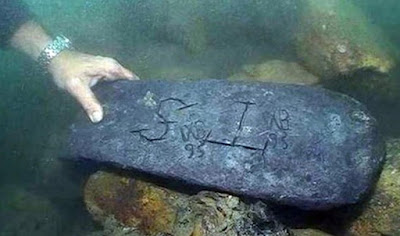 A UK–US archaeological team recently discovered a mysterious 55-kilogram (120 lb) bar of silver in the shallows off Sainte Marie Island in Madagascar. The find might have belonged to the infamous Scottish pirate Captain Kidd.

The team was led by Barry Clifford, who previously discovered remnants of Kidd’s ship, Adventure Galley. In 2000, Clifford found a metal oarlock, Ming porcelain, and 300-year-old bottles of rum. He believes that the silver bar is part of the same wreck.

Enigmatic engravings cloak the silver. The letters “T” and “S” appear prominently along with smaller numerical carvings. Kidd was a privateer in the Caribbean for years before he turned to the more profitable trade of piracy.

When Kidd was captured in Boston in 1699, the jewels in his ship were valued at nearly $10 million in 2015 dollars. Kidd met his fate on the gallows in 1701. The remainder of his treasure was never found.

If he had 10 million in jewels aboard when he was captured, one can only imagine how much more he had hidden away, ya know? Bet that bit of info sent lots of treasure hunters out searching.

Coffee in the kitchen once again. Anyone want some cinnamon toast and hot chocolate?
Posted by HermitJim at 12:00 AM

Can't even imagine how high that pile was. Quite the pirate he was.

I always figured they spent the loot as fast as they stole it. Why else do what they did?

If murdering people & rape was all you wanted there have always been easier ways to do that. I figured the excitement, the risk/danger, the fun spending the loot ... the adrenaline.
How many pirates really lived to a ripe old age and spent a quiet life living off what they had stolen?
Being a pirate sounds like a profession rather than a hobby/sideline gig like going viking was for the Norsemen in the 900-1000 period...

Hey Jo...
I reckon it did make a nice size pile at that! Hot coffee coming up!
Thanks for dropping by today, sweetie!


Hey Rob...
They must have taken their Job very seriously to garner that much loot as carry around money!
I'm sure that not many lived to a ripe old age by today's standards.
Thanks for stopping by today!

It is hard to tell just why someone became a pirate. Take Captain Kidd, before he was a pirate he was a stylish Scotsman and a leading citizen of New York who even helped build Trinity Church.

Hey Dizzy...
We will never know what drove folks to do what they did, I reckon. Does seem strange, given his background.
Thanks for coming over today!