Secret Path Of The Dung Beetle...!

Just how smart can an insect like the Dung Beetle be? Turns out they are pretty darn smart!

Who would believe that this lowly insect can navigate using the stars? Takes some serious smarts to do that, I would think! 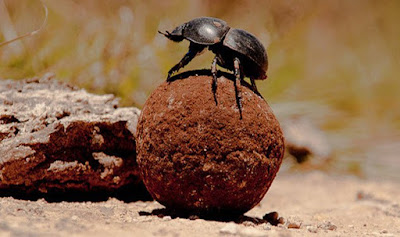 Don’t expect to see dung beetle paparazzi any time soon. That will just freak Vin Diesel out. But they do love photography—their version of it anyway.

Dung beetles do a little dance on top of a poop ball (where else?) during which they mentally take “snapshots” of the sky. Researchers believe that they do this to determine their position and that the dance creates a memory of their geographical and celestial surroundings.

Afterward, they drop off the ball and can travel in a straight line. For a long time, it’s been known that insects, dung beetles included, use the light of the Milky Way to find their way. However, the beetles now show more advanced navigational abilities. During their dancing, these bug astronomers create an internal memory of the positions of the Sun, Moon, and stars. They then use this stored image to travel where they want to go.

It remains a mystery whether they use any other ways to plot their position. So far, none have been found. They certainly don’t use anything else that would make their lives easier. Even when the sky is completely hidden behind clouds, dung beetles don’t follow landscape cues like most other insects do.

See? I told ya they were smart little critters...well. maybe except for that rolling around a big ol' ball of sh*t and using it to lay eggs in.

Coffee in the kitchen again this morning, but it's supposed to warm back up later!
Posted by HermitJim at 12:00 AM

It is amazing what even a bug can do. Now tell me, how did that little beetle roll up that big ball of dung and get it so perfectly round? And yeh, I also know that square ones wouldn't roll very well. . .

Hey Dizzy...
Beats me how they are able to do the things they do. Just smarter than we think like I said. Pretty bad when you can't out-think a dung beetle, right?
Thanks for stopping by today!

These beetles have always fascinated me. Of course the sh_t part is a bit stinky.

Interesting. I did not know that and it's kinda amazing.

Wish we had some . . . kinda think pesticides farmers use may have killed them. I have never seen a dung beetle.

Hey Jo...
Fascinating critters, for sure. Used to watch them out in West Texas.
Thanks for dropping by today, sweetie!


Hey Sixbears...
Handy talent to have, especially if you were a sailor!
Thanks for coming by today!


Hey Janet...
Used to see them all the time in the country, but in the city...not so much!
Thanks for the visit today!

And just how do people know that's what the beetles are doing the dance for? Maybe they're just finishing out their job, getting down and going on their way, not knowing or caring which direction they go.
I've never understood how claims can be made to "know" what an animal, much less an insect, is thinking.