This critter belongs in it's own horror show!

It's scary all the way through and I can imagine having nightmares if I caught one or even saw it in person! 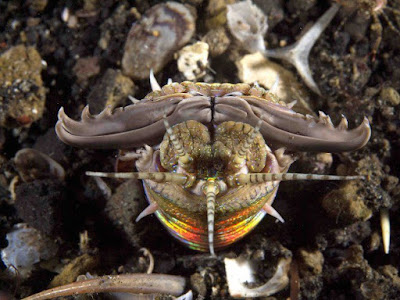 There’s nothing about the bobbit worm that isn’t grotesque or morbid. Even its name came from a court case in 1993, involving a woman named Lorena Bobbitt, a knife, and . . . something else that looks like a worm. Equal parts Tremors Graboid and unholy hellspawn, the bobbit worm can grow up to three meters long (10 ft). It burrows into the sea bed, leaving a small portion of itself above the surface. When a fish wanders by, the worm lunges out, snags the fish with its massive pincers, and drags it underground.

Most specimens haven’t been found in the ocean—but accidentally stowed away in saltwater aquariums. They hitchhike into the aquarium in rocks and gravel taken from the ocean, then slowly grow under the radar. In 2009, a giant bobbit worm was found in Blue Reef Aquarium in England. It was noticed when the aquarium workers took apart the tank to figure out why all their fish were disappearing.

This is NOT something I want in my aquarium at home, let me tell ya! It would weird me out!

Coffee in the kitchen this morning. It's chilly outside!
Posted by HermitJim at 12:23 AM

Nope. Just lots of nope. That's the sort of fish you just cut your line and pretend you never saw it.

It's hard to believe that people put rocks in aquariums without a good brisk boil to kill possible pathogens.

Well you won't find a salt water aquarium in my house. Gads that thing is ugly.

I read that you are going to have some really cold weather down across Texas. It is still cold here too but no longer in the 20's but the low 30's and 60's for highs. Sure glad I invested in that new tower heater. See you in the kitchen for a nice hot brew

Hey Sixbears...
Sounds like a good move to me!
Thanks for stopping by today!


Hey Gorges...
That would be the smart thing to do.
Thanks for coming by today!


Hey Jo...
Ugly just about says it!
Thanks for the visit, sweetie!

Now if you had a moat around your property, you could fill it with those fish and you could leave your doors unlocked because nothing could get across that moat and those fish, at least and still be a man. . .

Hey Dizzy...
How true, how true!
Thanks for dropping by today!