This story just shows how some folks, even given a second chance at a good life, revert back to their old life styles. Guess some people never change their bad habits.


Gotz Of The Iron Hand 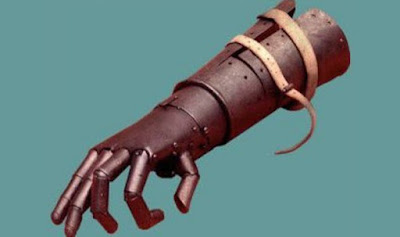 Gottfried “Gotz” von Berlichingen was an infamous German mercenary with a prosthetic arm that matched his fearsome reputation. During the 1504 siege of Landshut, Gotz lost his right arm to a cannon blast. He survived and commissioned armor with an artificial iron limb.

Internal gears controlled the articulated fingers of the iron prosthesis. The new limb was strong enough to handle a sword and delicate enough to clutch a quill. For 40 years, “Gotz of the Iron Hand” continued to terrorize the German countryside.

Born nearly 500 years ago in Wurttemberg, Gotz was a knight of the Holy Roman Emperor but spent much of his time robbing merchants and noblemen. He is now remembered as a Robin Hood–like figure. Gotz’s groundbreaking prosthesis is celebrated by Germans as a symbol of their national ingenuity.

Pretty advanced prosthetic for the times, I'd say. Doesn't look that bad, either.

Coffee in the kitchen this morning. It's cold outside!
Posted by HermitJim at 12:00 AM

Really cold here also - 19 degrees. If you hadn't old us how old that arm is I would have assumed it was modern day. Wow, talk about someone ahead of his time!!!

I had forgotten about this hand until you posted this. It was a pretty good invention for the times .
Pretty cold here this morning and once again I slept in not good. Stay warm

Hey Linda...
Does look pretty modern, doesn't it? The main thing that impressed me, was that it was functional!
Thanks for stopping by today!


Hey Jo...
Certainly ahead of it's time I would think.
Thanks for dropping by, sweetie!