Once in a while there comes along something so strange, no one seems to understand it. Sugarloaf Mountain is like that! 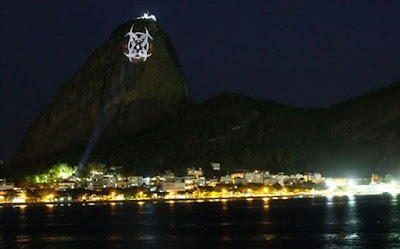 Towering above Rio de Janeiro, Sugarloaf Mountain stands 396 meters (1,299 ft) tall and is a world-famous geological feature. However, the strange signs, symbols, and texts which once appeared on the sides of the granite peak are mysterious indeed. In October 2013, green laser beams created “scrambled symbols” suggestive of a cryptic message. An eerie hologram resembling a pinwheel of four feathers framed by intersecting curved lines remained on the side of the mountain for two hours before gradually vanishing, to be replaced by the text: “#WINNER TAKES EARTH.”

Some suppose the mysterious messages may have been related to Brazil’s hosting of the 2014 World Cup competition, but the meaning of the bizarre messages remains a mystery.

Now, I don't know about you, but that message alone would be enough to seriously creep me out! I wonder just who sent it and how?

Coffee in the kitchen this morning again!
Posted by HermitJim at 12:00 AM

It's the aliens again.

I agree with Momlady - it's the aliens. Or some extremely clever people. Still creepy tho. Bitter cold here so coffee inside sounds good.

Some with a lot of tech sense after all it wasn't very long ago.

Strange message, and stranger still that it could not be identified as to origin.

I'll take some of that coffee, Bubba. Been a while since we sat down together for a cuppa. Let's plan on it, maybe later this week?

Strange message, and stranger still that it could not be identified as to origin.

I'll take some of that coffee, Bubba. Been a while since we sat down together for a cuppa. Let's plan on it, maybe later this week?

Hey Momlady...
I'm thinking you may be right!
Thanks for stopping by this morning!


Hey Linda...
Pretty cool looking, but creepy as heck!
Thanks for coming over today!


Hey Jo...
certainly smarter than I am.
Thanks for dropping by today, sweetie!


Hey Sis...
Always nice to have you drop by for a visit. Come when you can...
Thanks for the visit, Sis!

That picture shows a beam being projected onto the mountain from the town. Therefore, I must conclude that it was humans that did it.