What Happened To Auto Polo...?

Today's mystery is a question...what caused the end of Auto Polo?

I mean, it's similar to the destruction derby' right? Maybe it was a case of common sense finally setting in, but I doubt it! 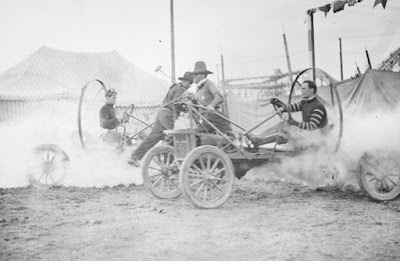 In 1912, a Kansas Ford dealer held what he hoped would be the first of many sporting matches with an eye toward generating business. It was held between the two inaugural teams, the Grey Ghosts and the Red Devils, of America’s newest sport: Auto Polo. It was played pretty much exactly as one might expect, like traditional polo but with cars instead of horses.

As cars were initially marketed as a replacement for horses, this makes a strange sort of sense. In this first match, held in a Kansas alfalfa field, two teams of three men competed: two men to drive the car and one to swing a giant mallet at a basketball-sized rubber ball. Despite (or perhaps because of) the likelihood of crashes, injuries and deaths, the sport skyrocketed in popularity for the next several decades, with the last matches taking place in the mid-1950s.

Seems to me that we take part in equally dangerous sports today. It might be fun to catch one of the old Auto Polo matches for a change. I'm sure that the horses would appreciate having a replacement

Coffee in the kitchen again today. Wet and chilly outside!
Posted by HermitJim at 12:00 AM

Looks more like the beginning of the "demolition derby". I agree the horses must really enjoy watching the cars instead of themselves. We had a very wet snow yesterday so my patio is covered. Coffee in the kitchen is fine by me.

Hey Linda...
Does look like a destruction derby,doesn't it?
Thanks for stopping by this morning!

I had never heard of this sport. I wonder how many people were killed doing this.

Its dry here but 37 degrees. So your kitchen still wins today's coffee clutch.

Makes sense to me, instead of playing that game riding horses, they played with the horses under the hood (grin).

Hey Jo...
I don't know how many, but I'll bet there was a few. Not a safe sport, that's for sure!
Thanks for dropping by today!


Hey Dizzy...
Lots safer for the horses that way, for sure!
Thanks for the visit today!