Humans have gone through some crazy trends before, but this might just be one of the craziest! 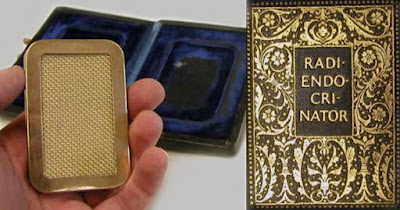 Before the effects of radioactivity were fully understood, people believed it to be a treatment for everything. From the 1920s to the 1950s, radium could be found in cosmetics, food, and even underwear.

Advertisements claimed that problems in the bedroom could be solved with the “Radiendocrinator,” or “radium underwear.” Although it may sound idiotic to consider radioactive underwear as a treatment, radioactivity was something completely new and natural in those times.

Radium exists in hot springs, which were considered extremely healthy as well, so the hype for this “new discovered, natural wonder” is more understandable. Both men and women bought “glowing underwear” or stuffed radioactive pads inside their underpants.

I believe I'll jst pass on this. I don't want any part of me glowing in the dark, especially my privates! Call me crazy...

Coffee in the kitchen this morning. Gonna get cold outside!
Posted by HermitJim at 12:37 AM

No "glowing" for me either. Too much other "crap" out there that causes trouble without adding radium underwear to the mix. Good one for today.

Hey Linda...
I know, right? Who needs it?
Thanks for stopping by today!

Good Grief! They did believe in some crazy things back then.

It was colder here again this morning too that's why I'm so late again hated getting out of my nice warm bed.

I remember the X-ray machines that they had in shoe stores. While my mother shopped for her shoes, I used to spend long periods of time with my feet in them so I could watch my bones move when I wiggled my toes. Didn't need night lights in my bedroom since my feet glowed in the dark. . (grin)

Hey Jo...
Seems like a lot of people went nuts over Radium back then.
Thanks for dropping by, sweetie!


Hey Dizzy...
I'm sure that you must have loved that! Watching your toes move, I mean!
Thanks for the visit today!