The Bloody Massacre In Jamestown...!

Not all of the relations with the Indians back in the early days were peaceful. Not by a long shot! 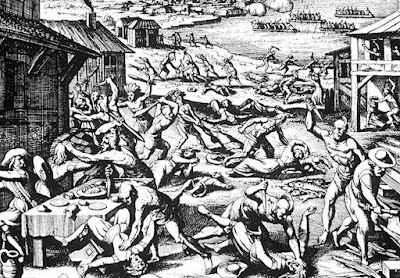 The attack on the colony of Jamestown that erupted on the morning of March 22, 1622, proved to be one of the deadliest days in the history of colonial America. Angered by the growing English population and the less than friendly manner of the English colonists who began settling away from the coast, the Powhatan tribe surprised the citizens of Jamestown and ultimately killed 347 of them.

The massacre, which was part of a larger Powhatan uprising, nearly ended the English colony of Virginia. One-sixth of all Virginians were killed on March 22, while many others became lost or were taken prisoner.

I'd say the Indians did a number on Jamestown with this attack. To lose one-sixth of your people in one attack has got to be devastating, to say the least!

Coffee out on the patio where it seems as though Spring has shown up once more!
Posted by HermitJim at 12:00 AM

The key to this attack is ...... less than friendly manner of the English, invading them was one thing but treating them badly was to much.

We have been having some light rains since night before last so it has kept the temps down a little.

Hey Linda...
Yep...that would certainly do it!
Thanks for stopping by today!


Hey Jo...
No one likes to be disrespected and I reckon they paid the price.
Thanks for dropping by, sweetie!

Just put yourself in the Indians' place. What would you do if the Arabs or the Russians or anyone else invaded our country? This continent was home to the Indians.

Hey Dizzy...
Guess they finally figured that enough was enough and decided to make their opinion known...the hard way. Had to happen sooner or later.
Thanks for the visit today!

it 'pears to me,the Invaders are now being the Invaded. Yet our native Americans are today still fighting invasion. Sun is beautiful which means I'm energetic and and already floating in coffee. Thanks though. Drink up!

Hey Caddie...
I reckon that some battles just never seem to end.
Thanks for taking the time to drop in today!

Your observation lacks historical context. Jamestown was the first permanent English settlement, predating the Pilgrim's landing at Plymouth Rock almost fifteen years. The Spanish predated the English and were probably more ruthless than the English in their relations with the Native American population. Then you had warring factions among the Native American populations that were equally cruel as the Europeans. Whichever "side" you take, the interaction between the Europeans and Native Americans was a complex one and can't be summarized in the simplistic terms you present here.