Anyone that's ever been to the gym may agree that the treadmill seems to be punishment after the first mile or two.

Guess what? That's how it got started...really! Back when it was first invented, folks thought it was good for the criminals to get a little exercise once in a while, I reckon. Here is the story from the pages over at Listverse!


Treadmills Started As A Punishment For Criminals 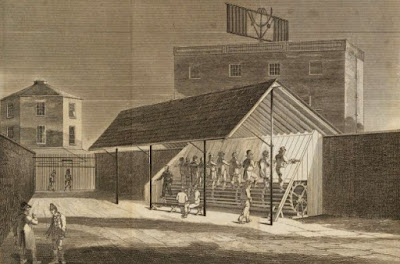 If you’ve ever been running in a gym and thought, “this is torture,” you’re more right than you know. Treadmills were originally built to make people suffer.

The first treadmill was built in 1818 by William Cubit. It was a wooden cylinder equipped with a handrail that worked like a hamster wheel, making the users walk without ever getting anywhere. Cubit put these treadmills in prisons, where they’d make convicted criminals walk on them for up to 10 hours a day.

After a while, the wardens realized they could hook treadmills up to grain grinders and water pumps to work as cheap energy sources. Soon, treadmills were in prisons all over Britain, and a few even spread to prisons across the pond.

At the turn of the century, however, the voice of the people declared that walking on treadmills was too cruel a punishment for even the worst of criminals.

I think that the treadmill seems like a good way to get rid of some excess anger and aggression in the prisons, but that's just me. Can't be much worse than lifting weights or boxing, can it?

Coffee in thew kitchen one more time, being Winter and all.
Posted by HermitJim at 12:00 AM

I agree about getting rid of pent up emotions, but boxing might be better.

I say, let's bring back the treadmills. If prisoners can "torture" themselves working out in the prison gym then they can "work out" on a treadmill hooked up to a power source and produce electricity. Why shouldn't they work for their keep? After all they are being "punished" aren't they?

i say criminals should come out thin and weak instead of bulked up for the next rape and other terrorist behavior.
no weights or gyms, just walking in the yard and any farming or other work they are allowed or required to do.

Wonder how many feel and broke a leg ankle after just a few hours. 10 hrs is crazy. But yes why let them lay around all day watching TV or other fun things. They are there for doing something very wrong

Not to cold here this morning but not warm enough by any means to sit outside so kitchen it is.

Yep, they are torture. . . I just prefer a rocking chair, although we have a tread mill, but I like the Gazelle exercise machine much better, it also works the arms along with the legs. Which reminds me, maybe someday I should get back to using it, maybe. . .

Hey Momlady...
Maybe some counseling or something like that. I can understand some activities are better suited for anger release than others, though.
Thanks for stopping by today!


Hey Linda...
I'm kinda in favor of that idea actually. Might be a good thing!
Thanks for coming by today!


Hey Deborah...
As long as they get regular exercise of some kind and are fed, then what else is really needed?
Thanks for the visit today!


Hey Jo...
I can't imagine what all goes on in prison and don't really want to find out.
Thanks, sweetie, for dropping by this morning!