Now I'm not the brightest bulb in the pack, but even I know that mountains aren't supposed to move.

I mean, I can see them drifting away a little at a time or something like that, but changing direction every year...that's certainly got me buffaloed! 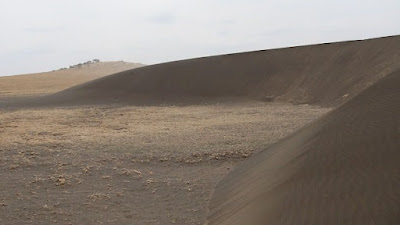 Mountains aren’t supposed to move, but a towering mountain of sand is doing just that, traveling at a pace of 20 meters (66 ft) each year. It’s not just the massive dune that moves, either. According to Tanzania’s former president Jakaya Kikwete, a handful of the mountain’s sand “continued to move” even after he’d transferred it to his car.

Standing 10 meters (33 ft) tall by 100 meters (330 ft) wide, the crescent-shaped mountain of sand changes shape and direction every decade. It once even split in two and traveled in different directions. It’s believed to be the product of a volcanic eruption. The Ngorongoro Conservation Area Authority uses beacons to track and predict the mountain’s movements.

Now, I may be crazy, but moving about 66 feet a year seems almost to be something that a living thing would do, ya know? I can guarantee that if I put some of this and in my car and it started moving...well, then it's good bye car!

Coffee out on the patio this morning. Back in the 70s again . Guess Winter's over for us!
Posted by HermitJim at 12:00 AM

It's like I keep saying - extraterrestrials are living here. This is just too creepy.

Makes you want to vacuum the dust out right away, huh?

Makes you want to vacuum the dust out right away, huh?

I have watched a few Documentaries on these moving sand dunes and they always say it is wind caused. But I never heard of this one. Hey what about the moving rocks? Mother Earth has her secretes.

Wow, it moves faster than I do! Any link to further information?

Hey Linda...
You may just be right! They may be here already !
Thanks for stopping by today!


Hey Sis...
Yeah...it kinda does at that!
Thanks for coming by this morning!


Hey Jo...
She does keep Her secrets well, doesn't She?
Thanks, sweetie, for dropping by this morning!


Hey Ian...
I couldn't find any other links to more information. Sorry.
Thanks for the visit today!

Wow, there are lots of strange and wondrous things in nature, some we still don't understand.

Hey Dizzy...
I think we have more than a little to yet learn about! Always playing catch-up.
Thanks for the visit today!