How Crazy Is Crazy Enough...?

At some level, every killer is crazy. That's my opinion, anyway.

I'm not talking about killing in time of war, but everyday, run of the mill murders! I'll never understand what drives folks liker this. 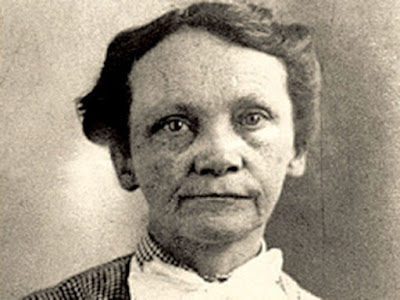 Archer-Gilligan, who’s also the basis of Joseph Kesselring’s “Arsenic and Old Lace,” is believed to be responsible for the deaths of her two husbands, plus close to 20 residents at the convalescent home she ran. (Some estimates claim she may be responsible for many more deaths.)

The breadth of Archer-Gilligan’s suspected killings led The Hartford Courant to re-dub the Archer Home for the Elderly and Infirm as the “Murder Factory.” The paper reported that “between 1907 and 1916, 60 residents died at the home, 48 of them in the prior 5 years alone.” All of her victims were male.

However, Franklin Andrews’ demise led authorities to become suspicious of Archer-Gilligan. On the day of his death, the 61-year-old was seen working on the lawn; by night he was mysteriously dead. After the media got on the case, Andrews was exhumed, where officials discovered elevated amounts of arsenic in his system. Then her second husband and four residents were exhumed—and they found arsenic or strychnine poisoning at play in their systems as well.

Though she was originally sentenced to death for Andrews’ death,“the verdict was eventually reversed on a technicality and during a second trial she pleaded guilty to second-degree murder and was sentenced to life imprisonment,” the New York Times wrote. In 1924 she Archer-Gilligan was deemed insane and sent to a hospital, where she died in 1962 at 89.

I reckon this lady just didn't like men, especially older men. If you ask me, she was just plain bat-shit crazy(pardon the French)!

Coffee out on the patio this morning, but you'll need a jacket!
Posted by HermitJim at 12:00 AM

I have to agree with you Mr. Hermit. She was a man hater and crazy. Have a great weekend. Cold and very damp here.

Hey Linda...
Little on the unbalanced side, for sure!
Thanks for stopping by today!

OH yes she was crazy or shall we say insane which ever way we put it.

we warmed up this morning it's 30 so if your patio is better I'm there.

She definitely was crazy enough, or too much for those poor people she did away with.