Back again with another find of something that couldn't be explained, that shouldn't even exist...yet does!

Mother Nature really likes to stir things up for us when we get to thinking we know it all, doesn't She? This just proves how wrong we can be, thinking that way! 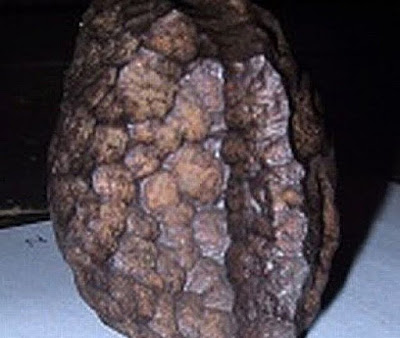 In 1885, Reidl, an employee at an Austrian foundry, discovered the mysterious Salzburg Cube (also known as the Wolfsegg Iron). He cracked open a seam of coal to find a strange-looking iron cube inside it. It had many cracks and little holes in it, as well as a strange color and a deep fissure down the middle. Reidl had never seen anything like it before, so after showing it to his boss, they turned it over to the Heimathaus Museum.

The next year, a professor at the museum named Adolf Gurlt studied the cube and determined it to be part of a meteorite. But further studies by the Natural History Museum in Vienna proved that it was not in fact a meteorite, but artificially manufactured from an unknown source. It is thought that the coal that “produced” the Salzburg Cube was at least 60 million years old.

Adding to the mystery of the Cube is how some people actually believe it to have vanished. The reasons for this range from it being part of a shadowy conspiracy to it simply being debunked as a worthless piece of rock and tossed away as such. This, of course ignores the fact that the Cube does in fact exist, and can be found safely on display at its usual home, the Heimathaus Museum in Vienna.

Ya know, we could go crazy just thinking about the stuff around us that we know nothing about. It's not worth spending a lot of time trying to figure it all out. In the course of our lifetimes, there are way too many unexplained questions...so why waste time worrying about it, right?

Coffee out on the patio again this morning! Sure is some nice weather outside.
Posted by HermitJim at 12:00 AM

A mystery indeed. Can't believe how warm it is. Wonder when we're going to pay for it.

Interesting looking whatever it is.

Hey Momlady...
Can't help but wonder that myself. We know it's coming though.
Thanks for stopping by today!

I love the mysteries of Nature. It puts us humans in place after we start thinking we know everyt9hing. Now, the only question I have is "When do we eat?".

Hey Dizzy...
Always a good question, buddy. My answer...whenever you are ready!
Thanks for stopping by today!